When you watch the trailer for Shotgun Wedding, you can’t help but laugh… everything about it is hilarious. Then you sit down and watch the film and you wonder what has changed. The first 15 minutes or so of Shotgun Wedding will make you grin, maybe even giggle, but there is nothing in those opening scenes that really makes you guffaw. In fact, I was starting to be a little disappointed and then, like magic, a switch was thrown and everyone brought their comedic A-game. Shotgun Wedding is an absolutely amazing Action RomCom. I’m not sure how else to describe it. You have comedy, you have romcom aspects, and you have action.

A number of years ago I was at a destination wedding at a tropical location. Looking around, I started thinking, ‘This would be an amazing setting for a film, but how do you turn it into a movie? One of my favorite movies of all time is ‘Die Hard,’ and that sparked the notion of, ‘Can you do ‘Die Hard’ at a destination wedding?’ And it took off from there.

When I read this quote from one of the film’s producers, I could totally understand how that vision became this film. The film is filled with action and not your typical romance action… people die in some very creative ways. The film, once you get past the 15 or so minutes of setup, takes off and is an absolute pleasure to watch. While there are plenty of awesome moments, a song that I heard at every high school dance in the late 90s shows up in a big way and it was, by far, one of my favourite moments of the film. I’ve gushed about the film, so I should probably tell you what it is about.

In Shotgun Wedding, Darcy (Jennifer Lopez) and Tom (Josh Duhamel) are getting married in a destination wedding. We learn a lot about the wedding and the planning – Darcy’s loaded father (Cheech Marin) offered to pay, but the couple decided to pay themselves, Tom took the lead on making the wedding perfect, and is even called a “groomzilla” in the opening moments. Moments before the wedding, Darcy and Tom sneak away for a conversation and pirates take the guests hostage. At this point, it is up to Darcy and Tom to save the day and what ensues is pure movie magic. If the scenes before the hostage taking were as strong as the film was from that point forward, this would have easily been a 5-star film because the second half of the movie is pure perfection. That first half, however, definitely has a little room for improvement.

Weddings are stressful. They can often be so much about the trappings: the flower arrangements, the music, the dress, who sits next to whom… All those choices can sometimes be so overwhelming and you can lose yourself. That’s what happens to our couple and ‘Shotgun Wedding’ is about stripping that away. Except in our movie, all those trappings of the wedding get burned or blown up or torn off.

I think that Moore has beautifully summed up the film here. Anyone who has gotten married can tell you how stressful it is. Arrangements, family, friends, everything. This film really shows you how insignificant those things are and it does so by literally destroying all the pomp and circumstance. If you’ve been through the ordeal that is a weekend of wedding plans (rehearsal, ceremony, reception, morning after gift opening), then you completely understand how hectic and stressful it can be. At this same time, while I’ve never been held hostage, I think I can safely say that a wedding is not nearly as stressful as a hostage taking.

One interesting thing that you might notice in the credits is that Ryan Reynolds is listed as an executive producer. It turns out he was originally slated to play Tom and even though that didn’t happen, his production company was still involved. I thought that was an interesting little detail to pick out when I was watching the credits for the film. 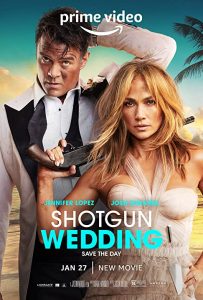 Movie description: Darcy (Jennifer Lopez) and Tom (Josh Duhamel) gather their families for the ultimate destination wedding but when the entire party is taken hostage, “’Til Death Do Us Part” takes on a whole new meaning in this hilarious, adrenaline-fueled adventure as Darcy and Tom must save their loved ones—if they don’t kill each other first.