Sometimes, you come across a movie that you aren’t quite sure how to deal with. For me, that happened with The Owners. I went in with high expectations because the synopsis sounded amazing – the film could take us almost anywhere because it was built on such a simple concept. While the film has a few unexpected twists, they are not of the magnitude that I expected.

Let’s talk about the basic synopsis. A group of friends are going to rob a house belonging to an elderly couple who is out for the evening. There’s a safe full of money according to one of the crew, whose mother is the elderly couple’s cleaner. When the couple comes home early, they end up in a “deadly game of cat and mouse.”

Let’s break this entire thing down:

I’m actually quiet disappointed in the writers, Matthieu Gompel and Julius Berg (also the director). They had the a decent concept, the funding to make a film, and several talented actors and they dropped the ball. Maisie Williams, Sylvester McCoy, and Rita Tushingham were all absolutely brilliant and the remainder of the cast held their own quite well along side the more experienced actors. They just didn’t have a great script to work with and there were too many missed opportunities.

Normally, the first act of the film sets up the remainder of it. In this case, the first 87 minutes setup the final 5 minutes. Those 5 minutes at the end were excellent (which is why I left the film at 2-stars instead of dropping it down to 1-star). There was so many places they could have gone, so much more they could have added. The film bills itself as a thriller, but I rarely felt a sense of urgency. I’m an edge sitter for most thrillers; I’m on the edge of the seat, leaning forward, eager to see what happens next. I didn’t feel that with The Owners. Instead, I found myself yawning a series of completely expected actions. There were so many times that the film could have pivoted and completely upset the dynamic. The elderly couple could have been younger people in disguise hiding out. The thieves could have been better equipped for the situation and not a group of blundering idiots with no business committing a crime. The film could have had a Sci-Fi or Supernatural element… either of those would have amped it up and made things more interesting.

One thing I want to point out is that I normally mention how production notes highlight a film and make it a lot more interesting. I was actually disappointed with the production notes for this film. There wasn’t a director’s statement, no interviews or interesting details. It only contained the synopsis and the long synopsis. Typically, a synopsis is a paragraph and spoiler free while the long synopsis is a couple of paragraphs and may mention lesser spoilers. In this case, the long synopsis told the first 87 minutes of the story. It also revealed that the film takes place in the early 1990s, I feel like the cell phones in use disagree with that time period, but that’s a relatively minor point.

At the end of the day, I’m going to call this thriller-lite. If you find yourself too freaked out and unable to sleep after watching a good thriller and want to ease yourself into the genre, this might actually be the movie for you. Since you get a pay-off at the end, it’s not the worst film, it’s just not a great thriller because it is weak on the thrills. I could actually see that appealing to a certain audience.

The Owners is available in Theatres, On Demand and Digital on September 4. 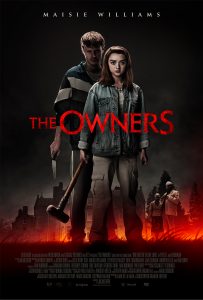 Movie description: A group of friends think they found the perfect easy score - an empty house with a safe full of cash. But when the elderly couple that lives there comes home early the tables are suddenly turned. As a deadly game of cat and mouse ensues the would-be thieves are left to fight to save themselves from a nightmare they could never have imagined.

“Relatable” is not the word that I would use to describe Ellen DeGeneres, yet it is somehow the premise of her new stand-up special on Netflix. I’m a big stand-up comedy fan. My wife and […]