I really wasn’t sure what to expect with Waiting for Anya, my wife is a fan of period pieces, but I tend to prefer films set in modern day (with an exception for medieval films). I was impressed with the cast list though, so I decided to give it a go. The film is based on a book of the same name written by Michael Morpurgo, the author of War Horse, and tells the story of a young boy who works with a widow in his village during World War 2 to help Jewish children escape from France to Spain.

As I said, it was the cast list that drew me in… the film stars Anjelica Huston (The Addams Family), Jean Reno (Leon: The Professional), Thomas Kretschmann (King Kong), and Noah Schnapp (Stranger Things). It’s pretty difficult, when presented with a film featuring Jean Reno, to not be drawn to the film… The Professional is still one of my favourite films. While many of the accents were real, there were a couple of fake accents that were painful to hear and the film used one of my least favourite cinematic devices… foreign word dropping. Why did everyone speak English, but the French spoke with French accents and the Germans spoke with a German accent? Even worse, why did they occasionally drop French or German words… it doesn’t add to the experience and is definitely something I dislike about films like this.

That said, I really enjoyed the film. I thought that Huston and Reno both did amazing jobs and that Noah Schnapp proved that he can be more than the strange, quiet kid on Stranger Things. One of the hard things for them to accomplish was aging Schnapp over the several years the film takes place… he doesn’t have the size for that to happen, so it seemed out of place. So, that’s the first thing to mention about the film, it takes place over a number of years in a small, occupied village in the south of France. The film follow’s Jo (Schnapp) who is tending to the family’s sheep while his father is off fighting in the war. When a bear attacks, Jo tells the villagers and they quickly deal with the  bear. Jo goes searching for his dog, who was injured during the attack, and meets Benjamin (Frederick Schmidt). As it turns out Benjamin is a Jewish refugee hiding out at his mother’s (Anjelica Huston) and smuggling Jewish children to Spain. He’s waiting for the arrival of his daughter, Anya (hence the film’s name), who was separated from him during the film’s opening scene. After this discovery, the film really kicks off and becomes quite interesting. I found myself leaning into my screen, waiting to see what would happen.

I actually found the relationship between one of the German soldiers (Kretschmann) and Jo to be one of the more interesting aspects of the film. I feel like the director did a good job of humanizing the conflict and showing what day to day life may have been like in an occupied city. I wasn’t there and it’s not a subject I’ve studied, so I have no idea how honest those scenes were, but I enjoyed seeing them in the film, it was something different from the typical war movie. I can’t say enough good things about this movie, which really caught me off guard. I wasn’t expecting anything great and, while it isn’t perfect, it is pretty good. Check out the film in theatres and on demand and digital HD on February 7. 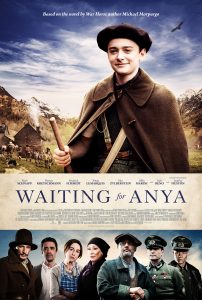 Movie description: Adapted from the novel by the author of War Horse, Waiting for Anya follows Jo Lalande (Noah Schnapp), a thirteen-year-old shepherd boy, and reclusive widow Horcada (Anjelica Huston), who come together with their village to help smuggle Jewish children into Spain during the harrows of WWII.

Domino has all the pieces it needs to be a great film – Brian De Palma directing, multiple Game of Thrones stars in the cast, and a plot filled with terrorism and intrigue – all it […]