Emily the Criminal is a movie. There is no denying that. It also features recognizable faces including Aubrey Plaza and Theo Rossi, both of whom are fantastic in their roles. What is debatable is whether or not the film is any good. I guess, from my 3-star review, you could say it is slightly on the side of good since that works out to 60%, but I’m not sure everyone would agree. So, what is the film and why did I find it so mediocre? Let’s take a closer look.

In the film, Plaza plays Emily, a woman plagued with debt and a criminal record, which prevents her from easily finding real employment. Instead, she’s an independent contractor performing food delivery. After taking a shift to cover for a co-worker, he “repays” her with a number to make “quick money.” After calling the number, Emily finds herself at a meeting of dummy shoppers, people who buy goods with stolen credit cards. This is where she meets Youcef, played by Rossi. The film features crime, love, intrigue, deception, and death, everything that you would expect from a fantastic film. So, why don’t we get a fantastic film? There’s no real reason that I can immediately pinpoint. The story is interesting and the cast does a great job portraying the characters. In fact, I would go so far as to say they were brilliant, particularly Plaza.

I think that the film falls apart on writer/director John Patton Ford in his directorial debut. There’s a side story line involving Emily and her friend Liz (Megalyn Echikunwoke) that doesn’t add to the story or the progression of the characters. I don’t blame Ford for the dialogue itself, I actually enjoyed the majority of it and thought that it gave Plaza and Rossi a lot to work with. It’s just the way it all came together (or didn’t come together) that is the real problem. This film and story have potential. I think that conceptually, it could have been a very cool film. Instead, Ford seems to let his personal views on the world take away from what could have been a great crime flick. The big scene involving Liz, Emily’s friend, involves a diatribe against unpaid internships. At another point, Ford insists on pointing out how unfairly independent contractors are treated vs employees. There are plenty of films where these moments would work well. There are plenty of ways that these could have been used to show us why Emily made the choices she made. Instead, they feel like mini sermons, preaching a viewpoint to the viewer rather than advancing the story or truly building the character.

The second problem is the film’s conclusion. I found it to be lacking. Instead of giving us an interesting conclusion, it felt like Ford took the easy way out and set us up for a potential sequel. There were other ways the story could have gone that would have made a lot more sense and wouldn’t have felt like such a stretch. I don’t want to spoil the film more than I already may have, but the entire final sequence felt less than realistic. I’m also still not sure how or why one character died. I don’t recall them suffering sufficient injuries to take their life, yet somehow they just faded away – I guess they needed to be removed to get to the conclusion that Ford wanted.

If you’re a fan of Plaza or Rossi, you should watch this movie. If you’re a fan of interesting stories, you could watch this film – just remind yourself that there will be missteps along the way and that the ending is less than desirable. In fact, I wonder if Ford watched [movie name redacted, see below] prior to writing the conclusion because I felt there were similarities in how things were wrapped up. At the end of the day, Emily the Criminal is not a bad film and it will hold your attention, it just has the weak points that you would expect an inexperienced writer/director to introduce. Once you get past those, the film is reasonable enjoyable.

Emily the Criminal was released in theatres on August 12. 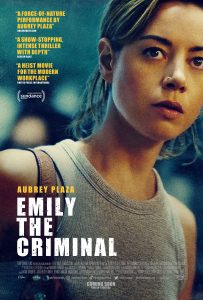 Movie description: Emily (Aubrey Plaza) is saddled with student debt and locked out of the job market due to a minor criminal record. Desperate for income, she takes a shady gig as a “dummy shopper,” buying goods with stolen credit cards supplied by a handsome and charismatic middleman named Youcef (Theo Rossi). Faced with a series of dead-end job interviews, Emily soon finds herself seduced by the quick cash and illicit thrills of black-market capitalism, and increasingly interested in her mentor Youcef. Together, they hatch a plan to bring their business to the next level in Los Angeles.

When I showed my wife the trailer for First Date, she asked if I was sure it was a modern movie, she thought it felt like it was from the late 90s. We’ve seen, during the […]