John Travolta’s latest film, Trading Paint, tries to mix dirt track racing with emotion. I’m not sure how many people are fans of both, but I found myself enjoying the film. I grew up a racing fan, watching NASCAR with my dad on Sunday afternoons, so this film presented an interesting opportunity since I was back home and able to watch the film with my dad. The film is unlikely to win any awards and it’s not the greatest movie you’ve ever seen, but it’s a decent film to throw on a streaming service or to catch on TV. In other words, don’t go out of your way to spend money on the film and you likely won’t feel like you wasted your time.

There are a few positives to the film. Michael Madsen is in the film and he’s an actor that I really enjoy seeing on the screen. It’s also the film debut of Shania Twain, it’s nice to see her branching out into film, but I’m surprised that this is the film she chose to start her journey. The film had a couple of country songs and it was really disappointing to watch the credits and realize that none of them were sung by her. Finally, we do get to see some dirt track racing, which is always fun to watch, even if it is staged for a film.

The film follows Sam (John Travolta), a once legendary dirt track legend who sponsors a car for his son, Cam (Toby Sebastian). The car is old and worn out and simply can’t perform at a level on par with his son’s driving skills. As a result, Cam ends up driving for another team, owned by Sam’s rival (Madsen) and the feud runs deep enough that Sam fires Cam from his towing company over the decision. While the story is set against dirt track racing, this drama aspires to give the viewer a high octane emotional ride. While there are some touching scenes and a backstory that seems designed to elicit a few tears, the movie doesn’t quite reach its goal.

At the end of the day, you have a movie with a couple of big names and big dreams. The story is decent and the acting is good, but it’s not anything special. I feel like it could have been a little more polished, particularly when it comes to the script. The concept isn’t horrible but it doesn’t dig as deep as other dramas, although it feels like movies these days are trying harder and harder to tug at our heart strings, 20 years ago this may have been a top notch drama.

If you are a fan of racing or Shania, this movie is probably worth checking out. If you want a decent drama, there are better films available to watch, but on a lazy Sunday afternoon this isn’t the worst option available to you. This might be good background for an afternoon spent cleaning with a movie playing. 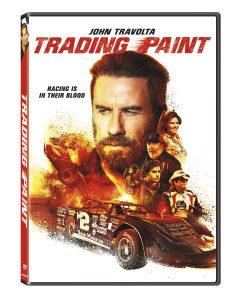 Movie description: A down and out stock car racing legend (John Travolta) is drawn back to the dirt track when his son (Toby Sebastian), an aspiring driver, joins a rival racing team, which stokes an intense and dangerous competition between father and son.