Mark Wahlberg and Peter Berg have teamed up quite a bit over the last few years – Lone Survivor, Deepwater Horizon, and Patriots Day. So it shouldn’t come as a surprise to see both of their names attached to Mile 22. There are some names, that when I see them, I know I’m going to watch the film and Mark Wahlberg is one of those names. This movie, however, had a lot of names to be excited about, including the director, Peter Berg. For me, Peter Berg will always be Dr. Billy Kronk. I was 12 years old when Chicago Hope first premiered and it was the first prime time TV series that I can remember following – Peter Berg, Mandy Patinkin, Adam Arkin, Peter MacNicol, and Hector Elizondo are all names that I will forever remember and careers that I will forever follow. Part of it may be that I had the biggest medical experience of my life during the course of the show, which made me even more interested in the show and the actors. So when I see Peter Berg, I know I’m going to be watching the film. The film wasn’t short on names I enjoy watching – Lauren Cohan, Ronda Rousey, John Malkovich… how could you go wrong with the cast list?

The film had an interesting premise. A special ops team working for the US government must escort someone 22 miles across an unfriendly city. The operation is so far off the books, that they must submit written resignations before the team can even begin to operate, just to cover the governments ass should anything go wrong. As the film progressed, it felt like a more grandiose version of 16 Blocks, which had me a little disappointed… I wanted something more original but I could feel the 2-star review brewing.

Lauren Cohan and Ronda Rousey are members of Wahlberg’s team, while Malkovich oversees the operations side from a command centre and we get a taste of what they do as the film opens with the team executing an operation against a group of Russian agents on US soil. The operation is successful, although they are forced to kill the Russian agents, and we move forward to the team operating in Indonesia. Here, the team acts on seemingly bad intel that Alice (Lauren Cohan) obtained from one of her informants Li Noor (Iko Uwais). While James (Wahlberg) works to sort out what went wrong, Li Noor turns himself in and demonstrates that the intel was good, they just weren’t looking in the right place. He has more intel, but will only trade it if they can get him out of Indonesia and to the US. This is where the film’s name comes into play as they plan a 22 mile trip across the city to an airfield.

As with most action films, the trip can’t be simple and members of the team are lost along the way. Ultimately, Alice and James must work with Li if they are to survive and reach the airfield. While the action was good and the performances were solid, at this point, I felt like I was watching a rehashed story and I wasn’t sure if 2-stars were going to cut it… that’s when they broke out the twist. To be honest, I did not expect the twist. I knew something was happening and the story wasn’t over, but the twist we got, wasn’t the twist I expected. It was impressive and enjoyable and enough to bump my final review up to 3.5 stars.

While I wouldn’t pay to rent this (again), I would definitely check it out if it were on TV or streaming. It’s not going to win any awards but it is a decent action movie. 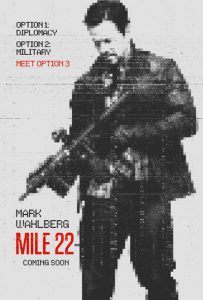 Movie description: In a visceral modern thriller from the director of Lone Survivor, Mark Wahlberg stars as James Silva, an operative of the CIA’s most highly-prized and least-understood unit. Aided by a top-secret tactical command team, Silva must retrieve and transport an asset who holds life-threatening information to Mile 22 for extraction before the enemy closes in.

I always find it entertaining when I see actors that I consider to be mainstream in a B-horror film. That’s the case with Mary, a B-horror film from Michael Goi. Honestly though, the B-moniker may be […]