When Boon first came to my attention, I was really excited. The story sounded up my alley and the cast list was filled with a selection of actors that I love seeing on screen. Actor and co-writer Neal McDonough is fantastic, but his performance as Damien Darhk always stands out to me. Then you had Tommy Flanagan (Sons of Anarchy) and Christina Ochoa (Blood Drive, Animal Kingdom), both of whom I absolutely love on screen. Finally, Jason Scott Lee, who has been brilliant in Doogie Kamealoha, M.D., although I was a little disappointed with how little of a role he played in the film.

After watching the movie, I still feel that the story was right up my alley. While a little cliché, it was exactly what I want from a lazy weekend movie and should have been a great way to spend 95 minutes. As you might have guessed from the 2.5-star review, it was not the best use of my time. The performances were great and the story was enjoyable, but the film fell apart, as so many good movies do, with horrible sound editing and awful music selections.

Before we talk about that, let’s talk about the film itself. McDonough plays our title character, Nick Boon, a wanted killer in hiding who finds himself mixed up in the local criminal underworld when he steps in to help out his neighbour Catherine (Christiane Seidel) and her son, Elijah (Jake Melrose). Catherine’s property is being used by local criminals (Flanagan and Ochoa) to dig a tunnel and Boon finds himself needing to save the family. As I said, the story is a little cliché, but it works and should have been entertaining.

You know within the opening moments of the film, however, that things are not going to go well. The music choice is a nightmare. It is loud and driving and very, very in your face. It does not fit the film at all and ruined the entire viewing experience. I will give credit to those in charge of the music selection. They were very consistent. The music is consistently bad from start to finish. It is probably unfair to blame the person responsible for these choices entirely as they may have worked if the company responsible for audio mixing, charlieuniformtango, hadn’t done such an awful job. I actually felt bad for Ochoa as you could barely hear half of her lines due to poor mixing. At one point, my wife walked by while I was watching the film and the asked if something was wrong with our TV. Sadly, the reason wouldn’t just impact us but all viewers of the film as the audio quality was depressingly bad. I’m pretty sure that during audio mixing the music was turned to 11 while the dialogue was turned to whatever is below 1 but still above 0.

We often here about how many people are involved in making a film and the credits list makes that clear, but typically the people you don’t see on screen execute their jobs so well that you never think about them. It is only when they screw up horribly, as the audio postproduction did here, that it becomes abundantly clear just how critical they actually are to the production of a good film.

Two other small notes about the film. The first is that the VFX were no better than the audio work. The muzzle flashes during the film’s big shootout scene actually made me laugh out loud. They were not well done and looked like something I would add with a typical end user video editing package. The other is the use of a mid-credit scene. I think that mid-credit and post-credit scenes are sins, but if a movie is big enough and executed well enough, the company can get away with that. Here, however, the film didn’t fit the bill, yet still snuck one in. It was nice to provide that closure, but it could have happened before any credits rolled, that would have been more appropriate.

At the end of the day the cast was excellent, the story was well written, and they were all let down by post production, giving us an end result that just isn’t quite what the film should have been and definitely doesn’t deliver on what I assume the vision of the writers and director would have been.

Boon will be released in theaters and on Demand and Digital on April 1. 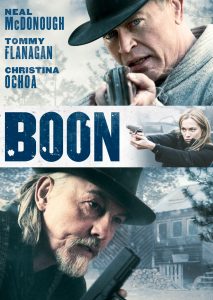 Movie description: Mercenary Nick Boon (McDonough) is trying to atone for his life as an enforcer for a ruthless syndicate. Running from his past, Boon moves to a remote area in the pacific northwest where he meets a struggling widow (Seidel) and her son. When he finds the pair living in fear of a criminal kingpin (Flanagan), Boon realizes the only way to protect them is to do what he does best: Kill.

As the credits rolled, my wife and I looked at each other and asked what we had just watched. Echo Boomers feels like it will never end. It’s not that it is a bad movie – […]