This is a movie that I’ve eagerly awaited since before it opened. When I realized, that my wife wouldn’t see this one with me, I pre-ordered it on iTunes and await its arrival. Today, at midnight, my iPhone alerted me to the availability of my pre-order and it was time to start watching.

I might have gone into this movie with above average expectations because I’m a fan of the movies and so far the TV series has been great. I think I would put it above The Purge: Election Year, but slightly below The Purge and The Purge: Anarchy. It did deliver enough to keep me interested in the series and I believe it opened up a lot of potential new ground that they can cover should they decide to do another movie focusing on the same characters (which one of my favourite parts of The Purge: Election Year).

Before we jump into the movie, let’s talk about the cast. It was great to see Luna Lauren Velez (Dexter) and Mo McRae (Den of Thieves, Sons of Anarchy), both have given solid performances in their past and both appeared in top rated TV shows. Marisa Tomei did a great job as the doctor overseeing the social experience but the role itself felt a little disconnected, she was willing to accept murder until she wasn’t and the characters moral compass was a little more skewed than it likely should have been. Lex Scott Davis and Joivan Wade made a convincing sibling pair. Joivan has been cast as Cyborg in the upcoming Doom Patrol series from DC and, after seeing The First Purge, I’m excited to see what he’ll do in the role. Finally, let’s talk about the standout star of the movie, Y’lan Noel as Dmitri. His resume may not be overly extensive, but I think we’ve got our next action movie star in the making. It’s easy to see him in a Sylvester Stallone, Jason Statham, or John Cena type role.

As for the movie, I remember the lead-up to the original movie. It took me years (and a rekindling of my interest in horror) to watch the film. It gave off a creepy vibe, although it did rely on jump scares to accomplish the job. I quickly devoured the original movies and I realized that the horror moniker wasn’t quite right, they exist in more of the creep thriller realm. This movie is quite a bit different. The first act is more of a drama, setting the backstory, and establishing the characters and their relationships. The second act gives us traditional “Purge-like” jumps and gore but never really reaches the levels of the previous movies. The final act, however, is full blown action movie. This is where we learn that Y’lan Noel is a bad-ass and find out the true origin of the Purge.

Spoiler - Best Line
Lex Scott Davis wins the award for best line. As she is trapped against a sewer grate, a hand reaches out from behind a creepy crying doll head and grabs at her crotch. She pulls out pepper spray, scores a direct hit, and is able to run away. As she runs, she yells, “Pussy grabbing mother fucker!”

If you are a fan of the Purge series or you can handle a few scares and enjoy action, this movie should be in your pile to watch, even if you wait for it to appear on your favourite streaming service. If those options don’t sound appealing at all, this movie likely isn’t for you. 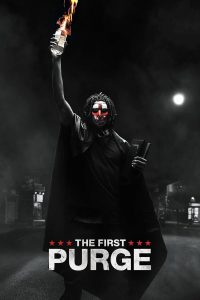 Movie description: The First Purge tells the story of the New Founding Fathers of America (NFFA) introducing the purge as a social experiment on Staten Island. This fourth movie in the series serves as the origin story for the most violent night in America.

If Not Now, When?

My wife and I sat down to watch If Not Now, When?  and we weren’t entirely sure what to expect. The trailer looked great, but the opening scenes to the film didn’t have the greatest actors […]