I’ve always been a sucker for a good mob movie and I enjoy true stories, so when I heard about Mob Town, it just made sense since it combined two of my favourites. The film tells the true story of the 1957 Apalachin meeting, a summit of American mob bosses organized by Vito Genovese (Robert Davi). The movie is told from the point of view of Ed Croswell (David Arquette), the office who discovered the meeting was taking place at the home of Joseph Barbara aka Joe the Barber (played by director David A. Abeckaser) and investigated on his own until his boss finally supported him.

The first thing that I’ll say about the movie is that it is the pacing is slow. The film moved like molasses in almost all the scenes involving the police, yet it felt much faster whenever the mob bosses or Joe the Barber were on screen. This was one of my favourite aspects of the movie as everything jumped around and everyone spoke faster whenever the criminal element was involved, but when only the cops or townsfolk were around, everything slowed down, giving a real country bumpkin feel to the people of Apalachin.

Secondly, the film has a very undeserved R-rating. There might be a few instances of foul language and there’s one or two shootings, but the film is cleaner than most prime-time procedurals. The movie feels like a PG-13 rating would be more appropriate. From what limited material I’ve read on the meetings, I could see this being used in a history class on the mob, so I would think the R-rating is somewhat disappointing as it potentially limits the audience. Although, I have to wonder if anyone even pays attention to ratings anymore.

It’s hard to talk about this movie without talking about David Arquette. I’ve always been a fan of his acting and I feel like he nailed this role. He’s completely believable as a divorced cop that’s dedicated to the job while surrounded by inept colleagues. Part of the character’s charm is watching him bumbling around whenever he interacts with Natalie (Jennifer Esposito). I think that a movie exploring the relationship between Ed and Natalie would be interesting. I realize that they are real people and this was a true crime story, but I loved those portions of the film, they gave the film a real charm and a bit of humanity. The same could be said for all the relationships though, Barbara and his wife as well as Ed’s colleague who flirts with a hotel clerk… there’s a lot of fun to be had in these relationships and I enjoyed watching all of them unfold on the screen.

At the end of the day, you have a solid mob movie without a lot of the usual violence that you get in most of the well known mob films. Instead, you get to see the background planning – what goes into making a meet happen. I’m sure that an entire film could have been shot covering the last 15 minutes of the film when the meeting is broken up and many of the mobsters are arrested, but the film included that only briefly and then summarized what happened. Instead, we got to see Joseph planning the meeting, Ed investigating based on a hunch, and everyone else setting up and preparing for it while their lives moved forward. I thought this was a really smart way to present the film, and I appreciated it a lot more because of that.

Check out Mob Town in theatres, on VOD and Digital HD on Friday, December 13. 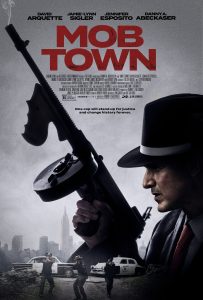 Movie description: David Arquette stars in the true crime thriller, inspired by the notorious mob summit of 1957, where over 50 mafia leaders across America converge on a small town in upstate New York to honor the new "capo dei capi" (Robert Davi). Stumbling upon their illegal operations, Sgt. Ed Croswell (Arquette) risks his life to stand up for justice, shedding light on the massive web of corruption to change the face of law enforcement forever. Directed by Danny A. Abeckaser, Mob Town also stars Jennifer Esposito (Crash), Jamie Lynn-Sigler (The Sopranos) and P.J. Byrne (The Wolf of Wall Street).