If someone says, “Hey, do you want to watch a film with Alison Brie, Aubrey Plaza, Molly Shannon, Debby Ryan, Fred Armisen, Tricia Helfer, and Lil Rel Howery?” The answer is likely going to be, “Hell Yeah!” If that film ends up being Spin Me Round, you might find yourself wondering what it is that you just watched. You likely won’t be unhappy that you watched it, but you’ll wonder if the film lives up to the hype that those names bring. I’ll let you in on a secret… it doesn’t.

Spin Me Round is an interesting film that will leave you confused until the very end. It will, literally, spin you round. I watched the film and I’m still not sure what I saw. On one hand, it feels like a film that would benefit from a second viewing. On the other, it feels like a film that once you’ve seen it has little to no rewatch value. Once everything is laid out, there’s nothing left to see and no reason to revisit things. That said, it’s still a fun ride… I just expected more from the cast.

That’s not to say that the cast is bad, they all do a fantastic job in the film… it’s just a whacky story that often doesn’t make sense. I think that’s probably one of the biggest problems, the story is made purposely whacky, just to keep you guessing and move the film forward to the ultimate conclusion that the writers were looking for. That’s not always a bad thing, but there’s a lot of moments where you scratch your head while watching this. You need to suspend your disbelief for most of the film and, if you do that, you’ll be in for a good time.

In the movie, Alison Brie plays the manager of a chain restaurant serving generic Italian food. I dare you not to gag as they pour microwaved alfredo sauce out of a bag onto the pasta before serving it. Brie is nominated by her boss (played by Lil Rel) to visit a manager training course at corporate headquarters in Italy. She arrives to find herself with a group of other managers including characters played by Debby Ryan and Molly Shannon. Every step of the way, the trip goes wrong for our group of managers. From creepy staff to strict rules to boring training sessions, it feels like the trip from hell.

Of course, everyone was expecting an amazing trip to Italy, so people are disappointed and looking for distractions. The overly restrictive environment and odd interactions with both their fellow managers and the staff at headquarters causes some of our managers to start to look for deeper meaning and understanding in what is happening. As they grow more and more curious, it feels like we’ve found ourselves deep in an Agatha Christie novel and we start to wonder if our protagonists are in trouble.

The film is worth watching just for Alison Brie, Aubrey Plaza, and Molly Shannon. Shannon, in particular, delivers an incredible performance that is amazing to watch and the interactions between Brie and Plaza bring life to the film. Ultimately, the conclusion will be very unexpected and that’s where things fall apart and prevent this film from getting a better review. Throughout the film, the groundwork is laid, but it is so unbelievable that the viewer starts to think that something is going on even before the cast comes to that realization. The reality is that we’re told everything, we just aren’t paying enough attention.

Spin Me Round will be released in theaters, on demand, and on AMC+ on August 19. 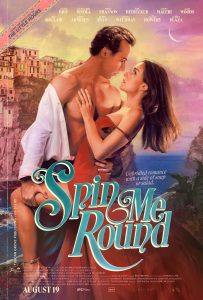 Movie title: Spin Me Round

Movie description: It sounds like the adventure of a lifetime: an all-expenses-paid trip to Italy, where a lucky few managers from an American fast-casual restaurant chain will get a crash course in the culinary arts against the backdrop of a scenic villa. Unfortunately, the getaway doesn’t always match the brochure, and Amber (Alison Brie) soon finds herself juggling mundane training exercises, an unexpected love triangle, and maybe an insidious conspiracy during her sojourn.

MANDIBLES is above all a genuine and sincere comedy about friendship. It’s also, thanks to the presence of a giant fly at the heart of the story, a fantasy film. Quentin Dupieux, writer/director I’m not […]