I’m a fan of Matthew Gray Gubler, he was one of my favourite cast members on Criminal Minds when I watched it and his scene in RV is one of the funniest parts of the film. So, when I saw that he was starring in a film at this year’s Toronto After Dark, I was rather excited. King Knight is a laugh-out-loud funny film that tells a really touching story. On top of that, King Knight is a who’s who of recognizable faces and voices. In addition to leads Gubler (Thorn) and Angela Sarafyan (Willow), you also get Andy Milonakis (Percival), Nelson Franklin (Angus), Johnny Pemberton (Desmond), the amazing Ray Wise (Merlin), and, one of the greatest horror icons, Barbara Crampton (Ruth) as well as the voices of AnnaLynne McCord and Aubrey Plaza. The rest of the cast does a phenomenal job, but all of the above actors stood out from other movies and series.

The film follows a Wiccan coven, led by Thorn and Willow. In preparation for Beltane (the Gaelic May Day festival), the covens high priest and priestess provide counsel to the members of their coven regarding their personal lives. We learn about their backgrounds and get in a number of laughs. We then watch the festival before finding out a horrible truth, Thorn was previously a cool kid… a jock… a <gasp> wearer of Nautica shirts. This sends Thorn on a walkabout where he has a conversation with a rock and a pinecone, before ultimately facing his past.

I don’t want to spoil too much of the film, so I think that I’ll leave the remainder of the film alone and, instead, talk about why I loved it so much. First of all, the film is hilarious. Richard Bates Jr. did an amazing job with the script and the cast executed it perfectly. I feel like I could make a quote-a-day calendar with just the lines from this film. The interactions between the coven members and Thorn’s walkabout keep the laugher going throughout the entire film. There were times when I had to pause the film and rewind just to make sure I heard them correctly.

More important than the humour, however, was the touching story. The entire concept of a story of “misfits” that find family in a way that most don’t understand is relatable and uplifting. It makes the film more dramatic than a film this funny has any right to be. Watching the interactions between the cast, seeing how important their chosen family is to them, and how they support each other gives this entertaining late night comedy some heart.

The film is a huge improvement from Bates’s last film, Tone Deaf, a film that featured a number of overlapping cast members including Ray Wise, Johnny Pemberton, and AnnaLynne McCord. This did, however, inspire me to check out Bates’s previous films — Excision (2012), Suburban Gothic (2014), and Trash Fire (2016) — I’ve already ordered in copies of two of the three.

Given the opportunity, I HIGHLY recommend you check out King Knight… you’ll laugh, you’ll love, you’ll be greatly amused. 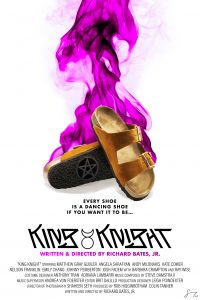 Movie description: KING KNIGHT is an outsider’s comedy starring Matthew Gray Gubler and Angela Sarafyan as Thorn and Willow, husband-and-wife high priest and priestess of a coven of witches in a small California community. When Willow unearths a secret from Thorn’s past, their lives are thrown into turmoil in this kooky, clever treat, decked with a wild cast that includes Nelson Franklin, Johnny Pemberton, Barbara Crampton, Ray Wise, Andy Milonakis, and the voices of Aubrey Plaza and AnnaLynne McCord.