How do you take a rising action star, cast them alongside one of the greatest actors in film history, and create a horrible film? This was the thought that went through my head while I was watching Vanquish. When I saw that Ruby Rose and Morgan Freeman would be starring in a film written and directed by the writer of Bad Boys, I was ecstatic. I’ve enjoyed following Rose’s career and I’m a lifelong fan of Freeman, but this film will definitely go down as a blemish on their resumes.

The fault likely lands on writer/director George Gallo. The cinematography for this movie is enough to make you sick… literally, the flashing lights and excessive use of multiple layers of video at varying degrees of opacity will likely actually make people feel ill. There were times that I had to close my eyes because the film was making me dizzy. Even when that wasn’t happening, the cinematography is some of the worst that I’ve seen – bad cuts, spinning cameras, distorted audio/video from the point of drugged individuals that is pretty much impossible to make out, and wireless video transmissions that glitch like they’re low-quality CRT security monitors from the 80s.

The premise of the film is as equally ridiculous as the cinematography. With better filming and a bit more finesse in the script, the filming could have been a typical low budget action flick. Freeman plays a highly decorated former police officer that was paralyzed and became a crime kingpin. His empire appears to be coming down around him, so he recruits his caretaker (Rose), who just happens to have a background as one of the most lethal people alive, to collect his debts. He coerces her into doing his bidding by taking her daughter hostage. We later learn that Rose has been laying low because people want her dead and they happen to be the same people Freeman sends her to collect money from. The action of the film is diminished by the filming and editing, and the story grinds because we get absolutely no character development – comparatively Stallone and Schwarzenegger have given us excessive amounts of character development over the years.

So… were there any positives? Of course… you got to watch Freeman and Rose act and they both did excellent jobs with the material they were given. Even if Freeman’s character made no sense, it was still Morgan Freeman and I’d watch him watch paint dry. Rose demonstrated that she’s got the chops to be a great action star. I could easily see Rose replacing Milla Jovovich or Angelina Jolie in any of their classic action roles or creating her own… she just needs better material to work with.

At the end of the day, if this film isn’t free, I wouldn’t watch it. Even then, I’d only watch it if you are a massive fan of Freeman or Rose. The story just doesn’t stand on its own and the visuals are severely lacking. Also, don’t get me started on the film’s artwork for the poster. Rose with angel wings made of automatic weapons? In the film, she only used handguns… so why was that incorporated into the art? One more mystery that we’ll never understand.

Vanquish will be released in select theatres on April 16, on Digital and On Demand on April 20, and on Blu-ray and DVD on April 27. 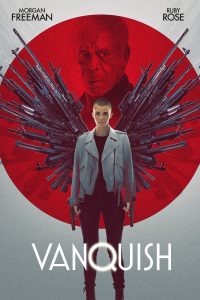 Movie description: From the director of Double Take, Middle Men, and The Poison Rose comes this stylish, glossy actionthriller starring Morgan Freeman (Se7en) and Ruby Rose ("Orange Is the New Black") that shows what desperation can drive a person to do. A mother, Victoria (Rose), is trying to put her dark past as a Russian drug courier behind her, but retired cop Damon (Freeman) forces Victoria to do his bidding by holding her daughter hostage. Now, Victoria must use guns, guts, and a motorcycle to take out a series of violent gangsters — or she may never see her child again.

The War with Grandpa

Fun. That’s probably the word that best describes The War with Grandpa. It’s a fun, family movie filled with a lot of laughs. Sure, the film is a little juvenile, but it’s a family-friendly movie with […]

I review films and TV shows and I love to read books and comic books, but the greatest form of entertainment is the musical. There is nothing better than being a part of an audience […]