For many years, Mr. Holland’s Opus was among my favourite films and Richard Dreyfuss was along my favourite actors. So, when the opportunity to see his latest film landed in my mailbox, I was eager to check it out.

I’ve been trying to think of the correct way to describe Astronaut and I think the best word to use is charming. This is a film that I could see myself watching 20 years ago as a teenager with my grandma and my parents on a Sunday night. I’m almost surprised the film didn’t have that old “Wonderful World of Disney” animation in front of it. Imagine that feeling when it’s slightly too cold in your home, but you don’t want to turn up the heat because you know it will be uncomfortable, so you climb into bed and you pull that big, old comforter over you and nestle into the warmth… that’s this movie. It’s that fluffy blanket on a cold winter night or marshmallows and a bonfire on a clear summer night. It’s not the wonder of a trip to an exotic locale, a ride on the world’s biggest roller coaster, and it’s not a 5 course meal from a Michelin Star restaurant. It is comfortable and enjoyable and, quite often, that’s better.

The film follows Dreyfuss’s Angus, a retired civil engineer and widower, as he moves into a retirement home, watches his daughter try to sell his home, and suffers from numerous medical issues. At the last minute, he enters a competition that will allow one person a chance to join the first civilian trip into space. The movie had four themes that melded to weave the story – A struggling family, the bond between a grandson and grandfather, the ageism that exists in society, and that feeling of being forgotten as the world rushes by. Those were the themes that I noticed or, least least, felt like I noticed. I’m sure the movie speaks to different people in different ways.

The relationship between Angus and his grandson, Barney (played by Richie Lawrence), was one of the most touching aspects of the film. It felt like they had a real connection and I loved watching their interactions. At least, twice, once during and once at the end of the film, I had to wipe a few tears from my eyes watching them. The seniors at the retirement home were another touching aspect of the film, I enjoyed seeing Graham Greene and Art Hindle on the screen and felt that they did an amazing job with the minor but significant roles their characters played. These men are Canadian acting royalty, it’s always exciting to see them on the screen.

The film did a great job of bringing in top notch Canadian talent.  This probably shouldn’t be a surprise given that it was filmed in Canada and the writer/director, Shelagh McLeod, is Canadian, but it’s still always nice to see. On top of Hindle and Greene, we had a number of recognizable Canadian personalities rounding out the film. Playing Dreyfuss’s daughter and son-in-law, we had Krista Bridges as Molly and Lyriq Bent as Jim, both are instantly recognizable from two of the best Canadian TV series ever made. Bridges played Kathleen Doyle, Jake’s sister on Republic of Doyle and Bent played Staff Sergeant Frank Best on Rookie Blue. You also have two of Canada’s best imports – Scottish born, Canadian raised Colin Mochrie (who I got to meet on stage during his amazing Hyprov show) and American born, Canadian dwelling Colm Feore, who was incredible as Martin Ward in 2006’s Bon Cop Bad Cop.

McLeod said in her director’s statement that she was wrote this moving while visiting her mother in a nursing home:

Spending many months visiting my mother at a nursing home was a life-changing
experience for me. Not only because I was about to lose my mom, but also because the
journey from her being an independent woman, to becoming a frail, frightened and
overlooked old lady, was a heartbreaking one. In the nursing home garden there was an
old man. He sat in his wheelchair, staring up at the sky for hours. One day I asked him,
‘What is it that you’re looking for up there…?’ ‘Another go…’ he said.

I read her statement after watching the movie, as I tend to do, and these words stayed with me:

It is our dearest wish that this story will offer a vision of hope and provide an uplifting
message to families universally: that if we support one another, we can all achieve our
seemingly impossible dreams regardless of our age and, in so doing, make our own
metaphorical journey to the stars.

Astronaut is a deeply personal story, and one that I feel is timely and I hope will
resonate with a universal audience. Because we are all on a one-way journey – and
what if we could, at our bleakest moment, perhaps the end of our life, take the trip of our
dreams and have another go?

To me, this was a story to remind us that it’s not over until it’s over and we can, at any point in our journey, make our dreams come true. Not only that, but we can be there to help our family make their dreams come true too. The movie is inspirational, it’s beautiful, and it’s so very Canadian. It comes out on Friday, July 26 and I highly recommend finding time to see this… preferably with your loved ones, eating a big bowl of popcorn. 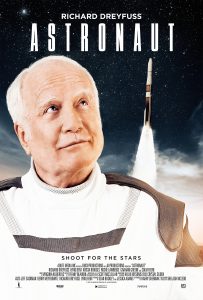 Movie description: Angus, a lonely widower, has his long-extinguished dream to become an astronaut reignited when a national competition is announced. The prize? One ticket for a trip to space! Way over the age-limit, Angus alters his birthdate so he can enter the competition. Against all odds, but with help coming from his dysfunctional family, he must battle against preconceptions, ill health and time, to win the ticket and take the trip of his dreams.