The more movies I watch and review, the more I find myself interested in the story behind the film. I enjoy the movie, I enjoy the entertainment aspect of it, but I really enjoy understanding what the director was thinking, why the writer made a specific choice, and what was going through an actor’s head when they shot a scene. I think the background of Running with the Devil helped me to enjoy it more than I would have without that additional understanding. If you watch the film alone, it’s still a good movie, but knowing the background of the writer/director and some of the choices that were made brings the move to a new level. As a piece of entertainment, I would say that this film is more of a 3 to 3.5-star movie, but when you add in the background details, I think it’s a 4-star experience.

The film stars cocaine. Sure, there are plenty of big name stars like Nicolas Cage, Laurence Fishburne, Leslie Bibb, Cole Hauser, and Adam Goldberg, but the real star is cocaine. The story used to highlight the drug involves a batch of compromised cocaine and the investigation to find where the break in the supply chain exists. The movie focuses on the people who move the drugs, the ever increasing cost of the drugs, and the impact the drugs have on the lives of people they touch. It’s interesting that the film flashes up the cost of the drugs at each point in their movement, further highlighting that the drugs are the focal point.

To further decrease the importance of the characters, there are no names in the film. The characters are simply known by their roles in the world – The Cook, The Man, The Boss, The Agent in Charge, The Executioner. I didn’t necessarily catch on to the reasoning behind this initially, because I failed to realize that the drugs were the star of the film. At first, I thought that the names were cheesy and unoriginal, but understanding why writer/director Jason Cabell made this choice really speaks to me and I think it’s a very unique and original choice. Speaking of Cabell, he’s an interesting man. He’s a former active-combat Navy SEAL who served in over 100 countries before transitioning to Hollywood. This movie is his directorial debut and is inspired by his own experiences assigned to the DEA in Columbia’s drug fields. Executive producer Shea Vargé proposed that the generic character names may be tied to Cabell’s military time.

Nobody has a name. I think that idea is derived from Jason Navy SEAL training. No names. Code words. That’s the drug community too. I thought it was a cool approach.

Part of the reason that I enjoyed this film, other than the unique take on storytelling, was the casting of Nicolas Cage. I’ve said multiple times that I’m a huge Nic Cage fan, so it was a given that I’d see this movie. Cage said was intrigued in the script but that his real interest was in working with Cabell.

I was primarily interested in the idea of working with Jason. It was exciting to me that I would be working with somebody who had actual life experience with the subject, hands-on experience in terms of being a DEA undercover agent as well as his history as a member of the Navy SEALs. That was something to be respected and admired.

Cage is, as he is in all of his movies, brilliant in this role. He attributes this to Cabell.

I thought that I’d want to take a walk in this world that he was putting together from life experience. To me it felt very authentic. Jason is, as he would say, legit. He’s got a lot of energy and I like that about him. He’s got a look in his eyes like he’s the real deal. You can tell that he’s been places and experienced things. I admire that. And I find that it makes me want to bring it, so to speak, for him because of his inherent memories and life experience and authenticity. I didn’t really do any prep. I just talked with Jason. I don’t have any reference point or experience with any of this. He does. So the best thing for me to do was to talk with him over lunch and get an understanding of that world.

Beyond Cage’s role as The Cook, I really enjoyed Adam Goldberg as The Snitch. I was surprised when I saw him in the cast list, I wasn’t expecting him to appear in this type of movie, but he was perfect for the role he filled. I think he describes the character rather well.

He’s just kind of a screw-up, I think. Sort of a druggie guy not doing all that well, trying to pick up a little cash here and there. I don’t know if he’s the sharpest knife in the drawer. I don’t know if he has any strengths. He might be all weakness. He’s a drug addict and a runner. I think there’s some natural humor built in just because the guy is really not super adept at handling situations. He’s just such a fuck-up.

The movie ends up being pretty unique when you consider exactly what it sets out to accomplish and how it does this. It takes real life experiences and a cast of great actors to tell the story of an inanimate object. In some way, it makes me think of that episode of The Simpsons, where Time magazine features the inanimate carbon rod on the cover. The item is the focal point of the story and it makes for a damn good story. Check it out in theatres, on demand and digital on September 20, 2019. 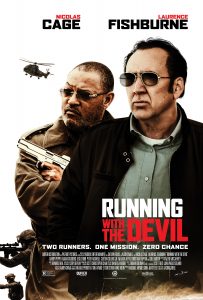 Movie title: Running with the Devil

Movie description: When a cocaine shipment is compromised to the dismay of a drug cartel’s CEO, known simply as The Boss, he orders his most trusted henchman, The Cook, and his partner, another master drug trafficker known as The Man, on a dangerous journey to audit the company’s supply chain. As the drugs make their perilous trek across international borders, past gangsters, refiners, and couriers, they are also being tracked by Federal Agents. When The Cook realizes where the network is breaking down, it may be too late to keep the cartel satisfied.

Nitram covers the events leading up to the Port Arthur mass shooting in 1996 without actually depicting the event itself. While the synoposis of the film talks about it being the mid-90s and the film […]