As I’ve mentioned before, my wife does not share my affinity for Hallmark Channel movies, however, in this case, she made an exception. She’s a fan of Full House, and this film stars D.J. Tanner, she’s also a fan of period pieces and time travel, both of which appeared to play a role in this film. The film initially feels more like The Wizard of Oz than a time travel piece and I feel the ending was vague enough to leave us wondering, either way it was a cute movie with a great message.

The film starts in the 1940’s, following Nurse Hanna (Candace Cameron Bure) as she goes about her day, taking pictures, and performing random acts of kindness. This includes comforting an orphaned patient, introducing an injured soldier and a nurse, returning a lost dog, and helping decorate for Christmas. All the while, she feels lost and wonders if she’s doing anything, mourning her husband who was lost in the war. After returning the lost dog and driving home, Hanna loses control of her car and crashes. The winter storm is picking up, so she seeks shelter in an old shed. As the storm gets worse and thunder and lightning fill the sky, she falls and bumps her head. When she wakes in the morning, she ventures outside to see kids skateboarding and people talking on cell phones. Nothing makes sense and she realizes she’s not in Kansas… rather the 1940’s anymore.

She’s taken in by the family of one of the town’s cops. While they don’t necessarily believe her story, they are mostly accepting and understanding. She reminds the family of some traditions of Christmas past and inspires some of the younger generation to take part in them. Along the way, there is plenty of talk of miracles and little things impacting the future. Hanna also helps Jake (played by Oliver Hudson, who was amazing as Adam Rhodes in Rules of Engagement) realize that his partner (and sister’s best friend), Sarah (Brooke Nevin, who I loved as Julianne Simms in the short lived Breakout Kings) is in love with him. Just as she did in the 1940’s, Hanna is still doing those little things to help everyone else.

The movie opens with a scene featuring Tom Skerritt, which immediately prompted me to yell out, “It’s the Sheriff from Picket Fences!” While he appears briefly during the film, not a lot is explained until near the end, where his identity is revealed and he manages to corroborate much of Hanna’s story. She learns a little bit about what happened after she disappeared into the future and they begin to look for a way to send her home.

I have only two complaints about this movie, which prompted the lower score than I would normally want to give a Hallmark Channel film. Both of these revolve around the conclusion of the film. If you don’t want the ending spoiled, stop reading now and know that I recommend watching it.

My thoughts on the ending
The film ends with Hanna attempting to dig her car out of the snow and her husband returning from war. They hug and the film ends. We do not find out if there was actually time travel or if she had a dream. We also don’t find out when she returned to… was it the day after she disappeared or a few days later (to account for her time in 2016)? I suppose this doesn’t matter if we don’t know the answer to whether or not she travelled through time. Unfortunately, I watch Hallmark Channel films because the story is always neatly wrapped up and I didn’t feel that happened here. We also don’t know the details around her husband and his miraculous return or why he walked around the corner with his duffel bag. The movie could have done with an extra 5 minutes to wrap up some details and give us that feel good ending that we’ve all come to expect. I suppose the intended feel good moment is that she makes it back to her own time and is reunited with the love of her life. The Sci-Fi geek in me wanted a conclusion for the non-romance side of the story. 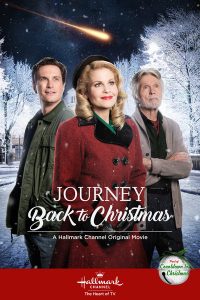 Movie title: Journey Back to Christmas

Movie description: WWII has ended and Hanna is still grieving over her husband’s disappearance. When the Christmas Comet appears for the first time in 70 years, Hanna is caught in a terrible storm and knocked unconscious. When she wakes up, she’s in 2016. A handsome policeman comes to her rescue and offers to let her stay at his family’s farmhouse. Despite suspicions about her past, the family takes her in. Hanna looks to unravel the truth about what happened to her and in doing so, discovers the small kindnesses she did in her time have reverberated to the present. She helps Jake and his family appreciate the magic of Christmas and will find her way back home and get the one Christmas gift she could only dream of, her husband.

Let the week of Hallmark movies continue! This time I watched Love at Sea starring Alexa and Carlos PenaVega. Alexa is probably still best known for Spy Kids and Carlos for Big Time Rush, my […]