Last night over dinner and a glass of wine, my wife and I rented 2018’s Overboard. As a fan of the 1987 version, I wasn’t certain what to expect given the negative reviews I’d seen floating around and the 25% on Rotten Tomatoes. I had previously attempted to get my wife to watch the 1987 Overboard but she turned it off without finishing it. It was time to see if the remake, staring an actress we both love (Anna Faris) could fare any better.

Those familiar with the 1987 version, will see many familiar scenes, modified for the gender swap and the 31-year gap between productions. The recurrent theme appears to be that rich asses deserve to be punished. In this version, Kate, played by Anna Faris, claims Leonardo (Eugenio Derbez) from the hospital after he falls off his boat and is left with amnesia. Kate is getting payback on Leonardo, now her husband “Leo”, for stiffing her on the bill over cleaning services. This is where the movies diverge. While Goldie Hawn’s character in the 1987 movie deals with rather gross and disgusting conditions, Leo, although overworked and underappreciated, is treated more like family from the get go. Another divergence from the original is the extensive use of subtitles, which may account for some of the lower viewer reviews as I’m not certain of the overlap between viewers who enjoy subtitles and viewers who enjoy romcoms. The subtitled scenes are stolen by Jesús Ochoa playing Vito whenever he is on screen.

At the end of the day, Overboard is a romcom. I will always judge a romcom by a different set of standards. Romcoms are almost designed to be disliked by the modern reviewer. They typically don’t check the boxes for social awareness, critical thinking, or pretentiousness. A friend and I were recently discussing that modern reviews seem to forget that movies and television series are designed for entertainment. They don’t need to be highly cerebral or make a political statement to be good movies. Popcorn flicks are just as valid as high intensity courtroom dramas… sometimes more so. Romcoms are, in many ways, the Shakespeare of our time, designed to elicit emotions. This cathartic release is therapeutic, it’s why we sometimes need “a good cry” or a “feel-good movie”.

If you want a feel good movie that produces just a few tears in the corner of your eye, Overboard is a perfect selection. It will never win an award and won’t likely end up in many movie collections, but, much like the original, it will see air play (or streaming in our modern world) for years to come. It’s cute, it’s funny, and it’s innocent. It’s that video of fluffy white puppies that you sometimes need at the end of the day. 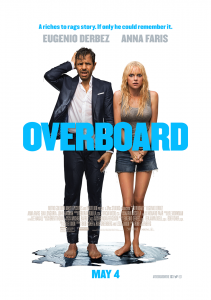 Movie description: A gender-swap remake of the 1987 Overboard movie, this version sees a woman, Kate (Anna Faris), take advantage of an amnesiac playboy, Leonardo (Eugenio Derbez), who refused to pay her for carpet cleaning services. While using "Leo" as an indentured servant, the Kate and her three daughters come to rely on having him around.