“A dark comedy- horror mash up for anyone who’s ever experienced social anxiety and lived to tell about it.”

When I saw that sentence, I knew this was a film that I had to see. I would not classify the film that I ultimately watched a dark-comedy-horror mash up. I would call it a dark dramedy that keeps you wondering. It isn’t a film that will cause belly laughs. It will, however, keep you amused and befuddled until the very end. That’s the point where you will likely find yourself a little let down. It’s the point where this otherwise 5-star film became a 4-star film. I’m not going to spoil it, but we’re definitely going to talk about where this film shines and where it falls flat.

Let’s start with the setup, which is something that a lot of us can relate to. Think back to your college/university days, the person you were and the friends that you had. Now, fast forward a decade – how many of those people are you still friends with and how much do you have in common? How often have you kept in touch? I’m nearly two decades removed from the experience and other than social media, I’ve kept in touch with very few people from that period of my life. That’s the premise of the film. Pete (played by co-writer Tom Stourton) is turning 31 and he’s been invited to a birthday celebration with his friends from university that he hasn’t seen in nearly a decade. From the get go, you can tell that he is clearly anxious about the reunion. Who wouldn’t be?

This is what makes the film relatable. We’ve all experienced social anxiety. “What if I say or do the wrong thing?” “Did I wear the wrong thing?” “Why are they looking at me like that?” “Did I somehow offend someone?” “Do they all hate me?” Many of us have had these questions in our heads and internalized them in horrible ways. All My Friends Hate Me lets you spend 93 minutes inside someone else’s head who is constantly asking those questions.

Writing this project started as a strange joke, a masochistic desire to explore just how terrible one poor guy’s birthday could be. But after a while, the more we dug into the nature of anxiety and paranoia, the more we realized we were onto something more substantial. Readers of the script would respond with: ‘you’ve described my recurring nightmare’ or ‘I feel like that the whole time!’ We had chanced upon a feeling that we all share, the horrible deep dread that comes to us every now and again after a party, or at a dinner, or when a friend doesn’t reply to a text… that unmistakable feeling that, yes, all my friends really do hate me.

My ambition is for this film to be gut punch funny but with a palpable dramatic tension that pulls you deeper throughout – I want the audience to be constantly guessing, as I was when I read it, is Pete paranoid? Or is he truly unraveling something more nefarious? I hope our audience will be completely in sync with Pete’s fraying sanity and desperation to be liked. Pete feels alone, lost, and wanting to connect. He just wants to have a good birthday party, guys! To me, this is funny.

This film draws you in and you the exact thoughts that Andrew Gaynord describes in the quote above and, as the Tom’s put it, they really have created my recurring nightmare. So, maybe I’m wrong, maybe this is a bit of a horror, just not your typical horror flick. This film is about the internal horror that we all create. I’m sure that some people will look at this and see a conspiracy among Pete’s friends to destroy him. Others will look at this and see a man on the brink of a breakdown. Others still will assume that there’s something sinister afoot. Maybe all of those are true, then again, maybe none of them are. If art is about creating something relatable to some and that provides insight to others, then this may be one of the most artistic films ever made. If cinema is about keeping people on the edge of the seats, completely enthralled and wondering what will happen next, then this might just be a cinematic masterpiece.

Where the film stumbles for me is, as I said at the beginning, at the end. I like closure. I like things wrapped up in a neat little bow. I want my “and they lived happily ever after” or “and they were never heard from again.” Perhaps that’s my anxiety and perhaps that makes me relate to Pete just a little bit more. Either way, I felt like I still had unanswered questions at the end of it all. The entire film is experienced from Pete’s point of view, which just heightens the anxiety. I believe I would have enjoyed the film a lot more if we’d had a rapid rewind and review of key scenes from other people’s points of view. That would have given me the closure that I look for in films.

As a side note, when I started this review, I gave the film 3.5 stars, but as I wrote about it, I talked myself into calling this a 4-star flick. It was definitely one of the more intriguing films that I’ve seen and I’m really glad that it was created, I just wish it had given me the closure I so desperately seek.

All My Friends Hate Me is now available on VOD. 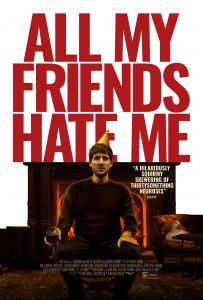 Movie title: All My Friends Hate Me

Movie description: It's Pete's birthday and the old gang from college are throwing him a party out in the country. During what’s meant to be a joyful weekend reunion, Pete finds himself increasingly unnerved by his friends’ inside jokes and snarky comments. As the atmosphere goes from awkward to terrifying to downright surreal, Pete is pushed to the breaking point. Is he being paranoid or is he the butt of some elaborate joke? From director Andrew Gaynord (The Characters) and co-writers Tom Stourton & Tom Palmer comes All My Friends Hate Me, a dark comedy- horror mash up for anyone who’s ever experienced social anxiety and lived to tell about it.