In 2015, we began researching California’s use of around 3,000 incarcerated firefighters living and working in conservation “fire” camps who are trained to combat mounting yearly wildland fires. These incarcerated firefighter camps were touted as progressive programs because of a track record of success measured by low recidivism rates, but very little documentation existed about the experiences of the firefighters and what actually happened to them post-release – despite the fact that these programs have been in existence since 1945.

I was intrigued going into Fireboys. The reason I opened with the words of the film’s directors is that I think they drive some of that intrigue. The film follows two incarcerated individuals during their involvement with Pine Grove Youth Conservation Camp, the last youth fire camp in California. In these camps, jailed youth are given the opportunity to fight forest fires (and perform other conservation tasks in their downtime) for $2-$4/hour and earn time off their sentences. It is a competitive program that appears to push the inmates to their limits. The film follows Alex Bailon as he enters the Pine Grove program and Chuy Hernandez as he is released from prison and ends his tenure with the program. Additionally, the film features Antoinio Wellington, a former resident of Pine Grove and current supporter of the program.

The film shows just how hard the inmates work and, based on Wellington and Hernandez, how effective the program is. Personally, I’m a fan of what they are doing. Teaching skills and providing valuable experiences feels like a great way to lower recidivism rates. While the pay feels low, it felt like the directors were really trying to drive this point home by comparing the pay to those of fulltime firefighters. I don’t feel this is a fair comparison as the inmates are paying a debt to society and are being housed by tax payer money, but there’s probably a middle ground to be found between the pay of a fulltime firefighter and the current pay of an inmate in this program.

I thought that the contrast of Bailon starting out and struggling through the training and Hernandez preparing for release was very interesting. Bailon definitely struggles to pass the program and qualify, but he mostly pushes himself to accomplish this. They were definitely tasks I couldn’t have completed. Hernandez, on the other hand, provides insight into what happens when someone is given direction and fostered to hep them grow. Watching him leave prison was actually heartbreaking, he was walking away from a family. He was a team lead and clearly loved by his team and the staff at Pine Grove. Obviously, being released from prison was a good thing, but it was difficult to watch his tearful goodbyes.

I think the most surprising takeaway for me was that due to felony convictions, many who leave Pine Grove do not qualify to continue their careers in firefighting. While the film notes that this is changing (a bit), it doesn’t seem sufficient. All of this time, energy, and money goes into training and preparing these men for life after prison in a profession that benefits society, but they aren’t given the tools to accomplish that. Sure, some of them will go on to work in the field, as we see with Wellington during his segment in the film, but that isn’t always the case.

Spoiler
This definitely wasn’t the case with Hernandez. I was disappointed to learn during the film that he would not be able to pursue his dream of fighting fires. I was very happy to learn, reading the press notes for this film, that in the spring of 2021, he was accepted by the California Conservation Corps and will be beginning his career as a professional wildland firefighter.

At the end of the day, this documentary is rather eye opening about options for other ways to run a prison system. Yet, this isn’t new, it has been around for more than half a century and is clearly very beneficial to both the individual and society. It seems to me like more programs like this should be implemented. 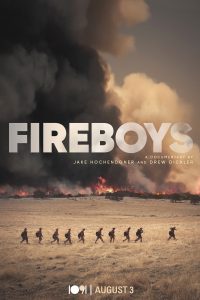 Movie description: FIREBOYS tells the untold story of young men incarcerated in California who are offered a way out: by fighting wildfires. Immersive and personal, this coming-of-age story examines a correctional path that is both hopeful and destructive.