I was really excited to watch Hot Seat. Any film that features cybersecurity is of interest to me because that’s my day job. It also means that I’m highly critical of those films and I’m going to be highly critical of this one. Before we dive into that, however, let’s talk about the film itself.

Let’s start with the premise. A crazed bomber, a “reformed” hacker, and a couple of bomb squad members in a deadly game of who dies next. The film features recognizable names and faces including Mel Gibson and Shannen Doherty. Kevin Dillon is front and centre for the majority of the film as our hacker who is stuck in a chair rigged with a bomb. He does an admirable job, other than the technical aspects of the film, but that isn’t his fault. My favourite appearance was Eddie Steeples who is best known as Darnell Turner on My Name is Earl. He doesn’t pop up in film often, but when he does, it is always a treat because My Name is Earl was one of the greatest TV shows of all time.

The film is best described as ‘meh’ and I think my rating reflects that. It has a few moments of tension and a couple of aha moments where pieces come together nicely. At the same time, the film’s “twist” ending isn’t much of a twist unfortunately and becomes obvious much sooner than I suspect the writer intended. Additionally, some of the cast is difficult to watch, this includes Shannen Doherty as the police chief and Sam Asghari as the SWAT team leader.

What I really want to talk about is the technical aspects of the film. Sometimes, when you watch a movie, they get things “kinda right.” Other times, they nail it. Most of the time, as is this case with this film, they completely miss the mark. I don’t blame the cast, the writer, or the director. I blame the technical consultants that they hire. I don’t know how they find those people, but I’d like to throw my hat in the ring. If you’re making a film that involves computer security, I will happily consult on your film and ensure that it is technically accurate. I’m not sure who gets hired to fill the roles, but I can only assume that they are community college dropouts that didn’t have enough technical acumen to pass the classes.

While I don’t have screenshots for the scenes, due to the lack of their inclusion in the press kit, I did take notes. I apologize to my non-technical readers who may not understand all of this.

I know this is a lot to take in… but I really do look for technical accuracy when I watch these types of films and sadly this was lacking that.

The highlight of the film and the reason why I didn’t rate the film lower was Eddie Stepples (who plays Mel Gibson’s partner) saying, “I’m too old for this shit.” That made me laugh and it was worth sitting through everything else.

If you’re looking for a cheesy thriller that is not technically accurate, but has a few good one-liners and a slightly suspenseful, but expected, conclusion… then this film is likely for you. The film did hold my interest from start to finish, which is more than I can say for many films that I’ve seen lately.

Hot Seat was released in select theaters, on digital and on demand on July 1. 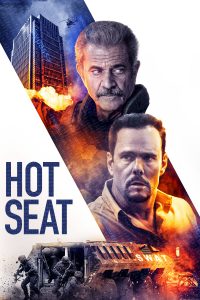 Movie description: Oscar-winner Mel Gibson brings this explosive cyber-thriller to life. The action begins as IT expert Friar (Kevin Dillon, Poseidon ) finds a hair-trigger bomb strapped to his desk chair. An unseen hacker orders him to steal digital funds online — or have his daughter abducted. As a fearless bomb expert (Gibson) arrives on the scene, the hacker frames Friar as the bomber. The tension mounts as Friar races to clear his name and expose the real terrorist — without getting himself blown to smithereens.