I’m a fan of Sherlock Holmes, but I’ve never been a die hard fan. I don’t own the complete works of Sir Arthur Conan Doyle and I haven’t read every story, but I’ve enjoyed the media I have consumed. So, when I saw that Enola Holmes was being released, I was excited. Millie Bobby Brown has been amazing in Stranger Things and was great in Godzilla: King of the Monsters. She was incredible in this film and I’m not sure anyone else could have played the role as she did.

The film is based on the Enola Holmes book series by Nancy Springer, which means there is plenty of material to keep this series going.

My habit has been to introduce female fictional characters into what were formerly predominantly male tales. So I chose to give Sherlock Holmes a much younger sister. It delighted me to create a worthy female counterpart who has all the sass, the mental acuity, the deductive ability and the instinct to beat him at his own game.

Brown’s older sister Paige was reading the book when she felt that her sister would be a perfect fit and, with the help of their parents, they saw the film created at Legendary Pictures, the studio that Brown worked with on Godzilla: King of the Monsters.

The story follows Enola (Millie Bobby Brown) as she searches for her mother, Eudoria (Helena Bonham Carter), who went missing on her 16th birthday. At the same time, she is trying to evade her brothers, Sherlock (Henry Cavill) and Mycroft (Sam Claflin). As she starts her journey, she encounters Tewkesbury (Louis Partridge), a Lord-to-be, who is fleeing his family. As the tale progresses, Enola and Tewkesbury become more and more intertwined.

I think the main reason I enjoyed the film is that it’s filled with action, adventure, and intrigue but, at the same time, the entire family could watch and enjoy this movie. It is a constantly evolving mystery that is entertaining and enjoyable. At a time when so many movies try to be so much more and fail, Enola Holmes is a simple story elevated by amazing acting and a lot of love. That’s the one thing that stands out in this movie. Everything comes together so smoothly, that you can feel the love everyone had for their roles and the story. I feel like every step of the way this film was given a lot of thought and consideration, from Nancy Springer’s source material to Jack Thorne’s adaptation through to Harry Bradbeer’s direction and the entire cast’s acting.

I will admit that starting the film by breaking the fourth wall was initially concerning to me. I was worried about where the film was going, but the technique was used brilliantly throughout the movie and for a character named Enola, which is Alone spelled backwards, it was the perfect device to communicate everything in her head. Had they attempted voice overs or some other device, it wouldn’t have worked nearly as well.

Enola is a role model for girls today because, despite the fact that people want her to conform to the society around her, she is fighting back. She’s operating in a misogynistic world with people like her brother, Mycroft, but she finds her power despite that. And by the end of her story she has found who she wants to be on her own terms.

This quote from Paige Brown really caught my attention as I was reading the press materials – particularly the “she is fighting back” part. One of my favourite parts of the movie is that Enola faces a challenge in adversary Burn Gorman (who is one of my favourite villainous actors – he just has the perfect look). I loved the fight scenes – 16 year old girl vs grown man. To my untrained eye, the scenes looked great… the fights seemed realistic. I thought that adding in these physical fights was a great way to really round out the character.

I love the fact that she can be very vulnerable yet even in her deepest despair she’s able to find herself again and fight back. I admire her courage and her strength. She goes to pretty dark places but she never gives up. It’s a big journey for her. She’s quite naïve and comes up against forces that are way beyond her. So she has to find her own resources, her own voice even when there is no one around to help her.

I’ve included a number of quotes in this review. I think that’s because they were interesting to me and I felt they were interesting to share. I’m not the best person to say that Enola is a role model for young girls because I’ve never been a young girl, but there are plenty of women associated with the film that have said it more beautiful than I ever could, so including their thoughts just made sense.

Here’s the deal, role model or not, at the end of the day Enola Holmes is a fantastic film with what I felt was a single misstep. Without spoiling anything, at one point a romantic interest of Enola’s kisses her hand, I can only describe her response as “fawning” over the individual involved. She bats her eyes, smiles, and almost looks like she’s going to faint. To me that felt out of character, but I wanted a second opinion. According to my wife, it makes sense, but in my eyes it was a weak spot for the character. I’m going to trust my wife on this one and accept her explanation, but it definitely felt wrong to me when I first saw the scene.

If you have a chance, invest the 2 hours in Enola Holmes, it is a great film and a lot of fun. You can find it on Netflix. 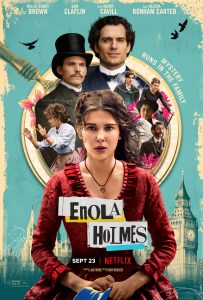 Movie description: England, 1884 – a world on the brink of change. On the morning of her 16th birthday, Enola Holmes (Millie Bobby Brown) wakes to find that her mother (Helena Bonham Carter) has disappeared, leaving behind an odd assortment of gifts but no apparent clue as to where she’s gone or why. After a free-spirited childhood, Enola suddenly finds herself under the care of her brothers Sherlock (Henry Cavill) and Mycroft (Sam Claflin), both set on sending her away to a finishing school for “proper” young ladies. Refusing to follow their wishes, Enola escapes to search for her mother in London. But when her journey finds her entangled in a mystery surrounding a young runaway Lord (Louis Partridge), Enola becomes a super-sleuth in her own right, outwitting her famous brother as she unravels a conspiracy that threatens to set back the course of history. Based on the beloved book series by Nancy Springer, ENOLA HOLMES is a dynamic new mystery-adventure that introduces the world’s greatest detective to his fiercest competition yet: his teenage sister. The game is afoot.

Have you ever thought to yourself, “Hey, I bet Tusk is the oddest film that Justin Long will ever star in?” If you have, then you might want to sit down because House of Darkness is just […]