I’ll preface this review by saying this is not my type of movie and I’m not sure I understand the vision that they had, so let’s talk about what was going on because I had a hard time wrapping my brain around the concept. If you’re looking for something different, this may be a movie you want to check out. It’s definitely cut in a way that is unlike anything I’ve ever seen before – at one point, early in the movie, the lead character gives us background and then calls for the credits to roll. I’ve never enjoyed the sitcom mockumentaries like Modern Family and The Office; viewers that enjoy that style of television, may find themselves enjoying this film much more than I did – it’s not quite the same style but it’s closer to that than anything else I can think of.

The premise of the film is actually quite interesting, even if the presentation is more annoying, so let’s look at the concept. The film follows a video game designer, Matt Booth (played by Michael Kingsbaker) as he travels to a Video Game Awards show in New Mexico to present a new video game he’s been developing. This was a bit of a plot hole for me, because you wouldn’t go to an awards show to do a presentation like this, you’d travel to a conference or trade show, but I can accept this mistake. He arrives at the airport early, runs into an old friend, and gets ridiculously drunk. He walks up just before his plane lands, only to discover that he’s in Mexico, not New Mexico, specifically Acapulco. The film becomes an action movie at this point as multiple groups try to get “the package” from him and refer to him as “the courier” only he has no idea what they are talking about. The body count, bloody, and bullets quickly add up in this film.

One important note before we dive in is that Bulgaria is perhaps not the country of choice for sound editing. I found that I had to cycle my volume between about 30% and 70% depending on the film scene. The music was ridiculously loud, the voices were barely audible, and the sound effects were overpowering. The video editing was not much better at times, with the movie often employing jump cuts that are better suited for YouTube videos than motion pictures.

We should also discuss the perspective of the film. It is told by our main character, Matt, via cheesy animations, frequent pauses in the action, and way too many voice-overs. A concept that could have been really quirky, ended up being poorly executed and really disappointing. The movie had the opportunity to be quite comedic but you were hit with a barrage of constant interruptions that essentially ruined the film. I could see this easily being a 3.5-star film with a better cut that involves less of the “historic perspective” because I definitely enjoyed the story, just not the execution.

With all these negatives out of the way, let’s talk about the positives. First up, the Las Brisas Acapulco resort is heavily featured in the film and it is absolutely beautiful. I actually found myself looking at hotel rates and room options as a result of this film, assuming they sponsored the film heavily, they made a good choice. There was also impressive casting that I wouldn’t expect to see in a film like this. While none of the roles were large, it was great to see the likes of Paul Sorvino, William Baldwin, and Michael Madsen – particularly Madsen who is a staple in a number of Quentin Tarantino films and an actor I always appreciate seeing. The film also introduced me to Ana Serradilla, who did a great job in her role as Adriana Vazquez. I would like to see her appear in more English speaking roles in the future as her performance was one of the aspects of the film that kept me interested.

I likely wouldn’t watch this film again, stylistically it just didn’t agree with me. As I said, the story is quite good, but I find the way the finished product is put together to be quite unappealing. I would love a different perspective, particularly if you enjoy mockumentaries, let me know if you enjoyed this film. 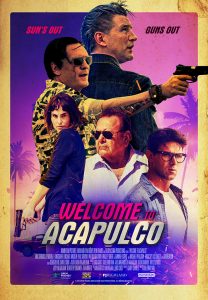 Movie description: Video game designer Matt Booth has one shot to save his career by unveiling his biggest project yet at the Video Game Awards in New Mexico. But after running into a friend at the airport and having a little too much to drink before his flight, he ends up in ACTUAL Mexico - specifically, Acapulco. As soon as he lands, he finds himself on the run from high-powered criminals, deadly hitmen and the Feds, all looking for a mysterious package that he has allegedly smuggled through customs yet knows nothing about. Partnering with a badass, beautiful femme fatale and channeling his inner video game action hero, the pair unravels a conspiracy that could shake the foundation of the United States, maybe even the world.

I really wasn’t sure what to expect with Waiting for Anya, my wife is a fan of period pieces, but I tend to prefer films set in modern day (with an exception for medieval films). I […]