That line is randomly yelled in the film and it made me smile. I loved Hubie Halloween, but when that line was said it brought me back to classic Sandler films. I literally yelled, ‘Yes!’ as I heard the line. My wife looked at me with a puzzled look and I had to pause the movie to explain it. Realizing that my wife didn’t understand was devastating – she’s not a huge Sandler fan, but I feel like a movie marathon is in order.

Let’s talk about Hubie Halloween though, a film that follows Hubie Dubois (Adam Sandler) as he goes out of his way to make Halloween safe for everyone in Salem. The movie is a family affair in two ways. First, I think it would be a great film to sit down and watch with your family. It has a good message, a lot of heart, and it was a lot of good, clean fun. At the same time Sandler’s wife, two daughters, and brother-in-law also appear in the film.

On top of his real family, the film leans heavily on both Adam’s film family and the extended Netflix family. The list of Adam Sandler regulars is pretty extensive – Kevin James, Steve Buscemi, and Rob Schneider along with people who’ve only appeared in a few of his films like Tim Meddows, Julie Bowen, George Wallace, and Colin Quinn. At the same time both Noah Schnapp (Stranger Things) and Paris Berelc (Alexa & Katie) made appearances from the Netflix side. One name I was surprised didn’t make the cast list was Jonathan Loughran, but on closer inspection of the credits he was involved in the film as Sandler’s assistant, he just didn’t appear in the movie.

In the film, people are going missing on Halloween and only Hubie, the town joke, notices. He tries to spread the word, but no one believes him, so it is on him to save the day. I really enjoyed the film and the positive message at the end, but I can see people that aren’t Sandler fans dismissing the film. My wife called it, “ok.” I thought it was everything I wanted from Adam Sandler – lots of laughs and a heartwarming story.

One thing that wasn’t explained was his thermos with more gadgets than Batman’s utility belt. At one point, he also gives utility thermoses to others and they still aren’t explained how or why he makes them. I felt like it was just there and existed for the film, but was never fully understood. I would have loved an added scene that explained these a bit more. I wonder if given the fact that they made him appear slow-witted in the film, was the thermos a way to show he was really a genius. Either way, I want his thermos, it was awesome.

I appreciated how in a standard length film, they managed to fit in so many side stories and bits but have them all come together. It’s impossible to list them without spoiling some jokes, but there are a few moments of pure movie magic that will have even the most anti-Sandler individual laughing.

The film is available on Netflix now. 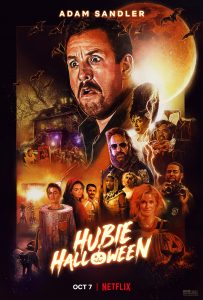 Movie description: Hubie Dubois (Adam Sandler) thanklessly spends every Halloween making sure the residents of his hometown, Salem, celebrate safely and play by the rules. But this year, an escaped criminal and a mysterious new neighbor have Hubie on high alert. When people start disappearing, it’s up to Hubie to convince the police (Kevin James, Kenan Thompson) and townsfolk that the monsters are real, and only he can stop them. Hubie Halloween is a hilarious family film about an unlikely hero with an all-star cast including Julie Bowen, Ray Liotta, Noah Schnapp, Steve Buscemi and Maya Rudolph, produced by Happy Madison.