This may go down as my shortest review in history. I guess we’ll see what happens as I type.

I was excited when I first saw the announcement for Warhunt. I’m a fan of both Mickey Rourke and Robert Knepper and I thought it would be exciting to see them together in a film. Unfortunately, the film is, at best, good for background noise while you’re doing other tasks. Personally, I wouldn’t want to sit down and watch it from start to finish again without doing anything else.

I like to say something positive about every film I watch and I will say that there were two positives that came out of this. The first is that I was reminded of what an amazing actor Robert Knepper is. He plays creepy and deranged so well. It’s sad that he tends to be typecast into those roles now, because I feel like there’s probably a lot of depth to him and I’d like to see him play a character with more depth. The other is Jackson Rathbone. I had seen him on screen in the Twilight films, but I wasn’t really familiar with him as an actor and he was fantastic in this flick.

So, what was the problem? The movie didn’t know what it was. Was it horror? action? thriller? There have been World War 2 horror flicks in the past and I’ve enjoyed them, but this one felt like it was trying to juggle too many balls in the air and dropping all of them. There was no character development, no real plot development, and just a lot of confusing scenes that didn’t tie together very well. The entire film felt like it was based on a really well done script that would been 30-45 minutes longer and they decided to cut all background and any scenes that would have tied the action together, leaving us with disjointed sequences that lacked logical progression.

In the last 20 or so minutes of the film, I’m not even sure what I was watching, what was happening, and what I was supposed to take away. I was honestly just confused by the entire process. This is one of those times where I feel that there is someone to blame and it has to be the director. I still think the story concept is really strong and could be really interesting. I also think the cast did a great job of portraying their characters. The flaws all came down to the way the story was told and how it was cut together.

I guess that the word I’d be most inclined to use would be disappointed. All of the building blocks were there to make this an awesome World War 2 horror flick and instead what we got was disappointing. A poorly produced film that is only worth watching for a couple of character performances.

Warhunt will be released in theaters and on VOD and Digital on Jan 21. 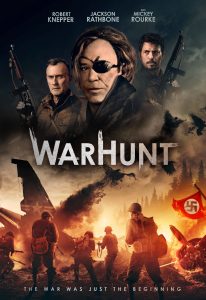 Movie description: 1945. A US military cargo plane loses control and violently crashes behind enemy lines in the middle of the German black forest. Immediately ruthless Major Johnson (Mickey Rourke) sends a squad of his bravest soldiers on a rescue mission to retrieve the top secret material the plane was carrying. Led by Sergeant Brewer (Robert Knepper) and Walsh (Jackson Rathbone), the soldiers venture deep into the forest near the crash site. They soon discover hanged Nazi soldiers and other dead bodies bearing ancient, magical symbols. Suddenly their compasses fail, their perceptions twist and straying from the group leads to profound horror as they are attacked by a powerful, supernatural force. Fighting for the dainty and struggling to survive they must uncover the shocking truth behind the force before the Nazis and do everything they can to remove all evidence it ever existed, even at the cost of their own lives