Imagine a lazy Sunday afternoon in the mid-90s, TV choices at the time were pretty minimal, but you always knew you could find a movie to watch. It may not be the greatest movie and you may have never heard of it, but you put it on and watch it because there’s nothing better to do. Into the Ashes reminds me of those films. You’re channel surfing, nothing is catching your eye, but you notice the credits. You see names like Frank Grillo or Robert Taylor, names you recognize from big franchises or well-known series and that’s enough that you stop flipping through channels and start watching the movie. These days, it’s the type of movie that you put on when as you scroll the list on Netflix or Prime Video. There’s nothing wrong with that film, we need that type of film to fill the middle ground between great and not so good. That’s what this film is… a film that is perfectly mediocre and there’s something enjoyable about watching a film like that.

The casting for this film is great – Luke Grimes, Frank Grillo, and Robert Taylor are all phenomenal choices and they fit their roles perfectly. After Longmire, it’s hard to look at Robert Taylor and not see a grizzled sheriff. Luke Grimes and Frank Grillo made for the perfect good vs evil face-off, Grimes being instantly recognizable from El Camino Christmas, which was better than it should have been, and Grillo appeared in a pair of Captain America movies as well as The Purge franchise. The story they had to work with was also well done, a classic revenge tale that we’ve seen done many times with a unique twist featuring the town sheriff as the father-in-law of our revenge seeking “hero” (probably not the right term to describe Grimes’ Nick Brenner).

Where the movie falls apart, making it only a mediocre film instead of a great film, is the direction. I find, lately, that more often than not, when a film falls apart, it tends to be the way the final product is cut together. It’s hard to say whose fault it is, since we’ll never know exactly who had input into the final cut, but in this case I wonder if someone other than writer/director Aaron Harvey was involved. Reading his director’s statement about his goal of creating a morality tale about how evil dictates choice and looking at how he set father-in-law and son-in-law in contrast to each other, I feel like there was an outside influence. Perhaps the film was running long, I don’t know… but I just don’t feel like the final product captures Harvey’s vision completely and the vision sounded incredible.

In reality, I think this film needs another 10 minutes, something to show Robert Taylor’s Frank Parson at odds with his son-in-law. This was conveyed to some extent via a conversation between Parson and his daughter, Tara (played by Marguerite Moreau), in a grocery store, but it feels so minor when you realize later on in the film just how critical the relationship is to the film’s concept. Frank invites Tara and Nick to join he and his wife at dinner, perhaps a scene showing them at dinner and displaying the tension would have helped highlight the situation. It’s not my movie, so I can’t say exactly what piece needed to be added, but that’s what I would have liked to have seen. I spent 60 minutes getting to know Nick without really seeing Frank’s side of things and then in the final 30 minutes, I saw a clashing of cultures without an explanation for the clash. Perhaps you just need the life experience of being a parent and watching a child make a choice you disagree with to fully understand Frank Parson in this film.

At the end of the day, the film is worth watching. I watched it on a Saturday afternoon as a storm was rolling in and it filled my afternoon quite nicely. Just go into it knowing that you need to pull a bit more out of the film than it gives you. Also, be prepared to learn that Robert Taylor could give Sam Elliott a run for his money in voice over work. I enjoyed the film more than I thought I would, I just wish there had been a bit more to it. I guess the best way to sum up my feelings when it ended would be “incomplete, but good”. 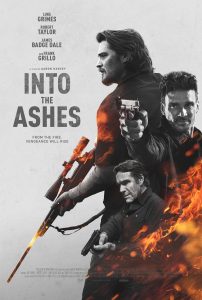 Movie title: Into the Ashes

Movie description: With an honest job and a loving wife, Nick Brenner believed he had safely escaped his violent, criminal history. But his old crew hasn’t forgotten about him or the money he stole, and when they take what Nick now values the most – his wife – he has nothing left to lose. Confronted by the town sheriff, who is also his father-in-law, Nick must decide if he will stay on his new path or indulge in his need for revenge and force his enemies to pay for what they have done.