I was excited when I first heard about Coming 2 America. I remember loving the first film when I was younger and I’ve always been a huge fan of Eddie Murphy. In preparation, I rewatched the first film, which also meant introducing my wife to it… somehow, she had never seen Coming to America. It had been years since I watched it, so watching it again was a great reminder of how good comedy was then. My wife’s constant laughter was also a great reassurance that it was a great comedy, since you never know if it’s nostalgia or genuine enjoyment when you revisit something from your childhood.

With the stage set, we were ready for Coming 2 America and I wasn’t let down. Eddie Murphy and Arsenio Hall were as amazing as they were in the first film. James Earl Jones, Shari Headley, John Amos, and Louie Anderson also did a great job of reprising their 30+ year old characters. On top of that the film had a plethora of great new additions – Jermaine Fowler, Leslie Jones, Tracy Morgan, Wesley Snipes, and Kiki Layne – as well as a number of excellent cameos – Morgan Freeman, En Vogue, Salt-N-Pepa, Gladys Knight, and John Legend. Nobody can deny that the casting was excellent. There were only two absences that I noticed Allison Dean as Lisa’s (Headley) sister Patrice and Samuel L. Jackson. While the absence of Dean was more noticeable, I feel like bringing back Samuel L. Jackson in another hold-up scene would have been an excellent addition.

In this film, Prince Akeem (Murphy) becomes King and returns to America to find a son he didn’t know he had. He does this because the heir to the Zamundan throne must be male and Akeem and Lisa have only had daughters. This allows the story to introduce numerous clips from the original film, laying on the nostalgia in a way that works well. They are also able to extend the original film’s story to create space for Akeem to have a son (Fowler). The importance of a male heir is exacerbated by the fact that a neighbouring nation, ruled by General Izzi (Snipes) is rumored to be plotting Akeem’s death. They did a great job of creating a storyline that allows all of these characters to exist without feeling cluttered or confusing.

The film doesn’t feel quite as funny as the original, but it is still a lot of fun and it makes up for it with the cast. One of my favourite parts of the movie involves the princely tests that Lavelle (Fowler) must pass in order to become the crown prince. One of those tests involves getting the whiskers of a resting lion and, I’m not sure why, but that scene really entertained me. I was also really entertained by Snipes’s character. I think that he did a great job with this role and brought an added level of comedy to the entire thing. The other part that I loved is that they managed to incorporate the Duke family from Trading Places just as they did in the original Coming to America.

Whether it’s for nostalgia or pure entertainment, I recommend watching this film. I would, however, ensure you see Coming to America first… the film provides so much setup for the sequel that it’s a necessity, in my opinion, to fully enjoy it. 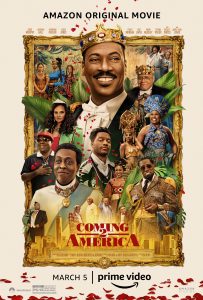