After I finished this film, I had to let it stew in my brain for a couple of days… I wasn’t quite sure what to make of it and, to be honest, I’m still not. So, this review is ultimately going to be a rambling review of my thoughts on the film.

The first thing I need to do, and I never thought I’d do this, is call out Lauren Driskill, the costume buyer for this film. The most ridiculous aspect of this film was the clothing everyone wore. The first 4 characters we encounter are wearing the following: A North Georgia Med T-Shirt, an Army T-Shirt, a #Hashtag shirt, and military fatigues. The professors of these four individuals: Doctor, Army, unknown (but she’s good with tech), and former Marine. This is the type of on the nose choice that makes people laugh when watching a movie and I would have regretted not immediately mentioning this because I noticed it immediately and my wife, who did not watch the movie but passed through the living room while it was playing, also called it out after only a few seconds of seeing the screen.

On to the movie…

In the first 30 minutes, I was actually impressed. The movie had a plot, it had actors, and it had a style. It had everything you need to make a movie work. I even enjoyed it. It wasn’t well acted and was cheesy, but that’s exactly what I want and enjoy in this type of film. I am rarely sent DVDs of movies I review, most screeners are digital… I believe I have two on my shelf that I’ve reviewed and I cherish them, but this is a film where I wish I’d been sent the DVD, I would re-watch it with friends (post-pandemic of course) just because of the cheese.

We should talk about the cast because I wasn’t familiar with any of them and looking at IMDB, I can see why… their credits include a lot of shorts and single episodes of TV shows. The film’s lead, however, Catherine Taber, has an extensive background in voice acting. Her performance was over the top, but I think that was mostly the dialogue. The film relied heavily on exposition. It was as if the writer didn’t think the audience would be able to follow what was going on in a rather typical post-apocalyptic thriller. With some tweaks and cuts to the dialogue and a few changes to the plot, this could have remained a film I was impressed with, because it wasn’t the actors that let it down.

At the end of the day, this film was the feature debut for the lead actor, the writer, and the director and I think that shows. The dialogue was heavy handed, the acting was over the top, and the plot was convoluted. I’m still not sure if the film was about aliens, terrorists, a biological attack, or zombies… I’m not sure anyone involved knows for sure either. The low budget effects (like the explosions in the opening scenes that looked like they were from an iPhone app) can be easily forgiven. It is, after all, an indie film. I’m not sure, however, if I can forgive the plot that was all over the place. I just want to know what was actually happening and I think writer, Michael H. Harper, lost his way and forgot what he planned to have happen.

If you cut a few lines of dialogue that simply over explain. If you do an extra take here or there to get a more natural delivery of some of the clunky lines (or maybe just reword them). If you pick a single cause for the attack that doesn’t involve Zombie like behavior, magical flashing lights, and the CDC blowing up. If you do all of that, I think you’d actually have a good film and that’s why I’m so torn on this one. It wasn’t great… I’m not even sure it was good… but it was on the cusp of good. It also might be so bad that it becomes good.

What I do know is that this is the type of film that you sit down and watch with a few film buff or horror buff friends. You turn it into a drinking game and take two shots when a character pulls the trigger on a shotgun pointed at a person’s head and then says moments later, “I don’t want to hurt you.” I guess they knew the gun had no shells left when they pulled the trigger? You take one shot whenever another classic film plot is added to the already overloaded list of plot points. Finally, you take a sip of your beer or cocktail whenever a stupid decision is made… after all, we don’t want anyone to die of alcohol poisoning.

I wouldn’t tell any couples that my wife and I know to sit down and make a date night out of this movie, but I’ve already told a lot of my film loving friends that this movie falls into the so-bad-it-is-good category. For that reason, I need to split the difference and bring this in at exactly 2.5-stars. The movie has some high points and it has some low points, but at the end of the day it is ridiculous enough to enjoy and have fun with.

Haven’s End is available now On Demand and DVD. 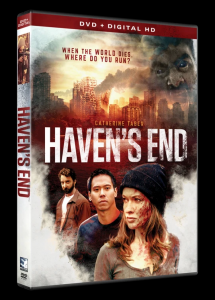 Movie description: When major cities around the world burn in the aftermath of massive, coordinated terrorist attacks, Dr. Alison Olsen and her friends escape Atlanta for the refuge of her family property deep in the heart of rural Georgia. What they find there is unnatural, violent, and anything but safe.

Have you heard the expression, “Do one thing and do it well?” It’s an expression that I wish writer/director Brea Grant had heard when she was writing 12 Hour Shift. I dislike checking multiple boxes for […]