This Netflix Original was released while I had family in town and no one else was interested in seeing it. Since I finally had a few moments to myself, I decided to sit down and watch this. The movie kept me laughing while repeatedly uttering, “This is ridiculous.” In the genre of late-night comedies, this movie may stand out as the stupidest of the late-night comedies. That, in itself, makes this worth watching. You need to understand, before viewing this movie, that you must enjoy dick jokes. The movie ties together budding teenage romance and an accidental penile amputation in a way that I wouldn’t have thought possible.

While the cast of this movie faces calamity after calamity, it is still more believable than other movies I’ve seen recently (*cough*Skyscraper*cough*). The story starts with a group of teens off on a camping trip. Originally a boys trip reuniting three friends, one of whom is currently attending school in Germany as part of an exchange program, find out at the last minute that they will be accompanied by two girls. The 5 teens embark on their trip, picking up booze with fake ID, and hike into the wood. The entire movie has a “will they, won’t they” give going on with two of the main characters, Sean (Daniel Doheny) and Becky (Geraldine Viswanathan). This is quickly interrupted when Becky’s brother, Jeremy (Eduardo Franco), decided to take a piss while playing with his balisong and, upon being startled, performs a self amputation. The remainder of the movie is a wild journey attempting to reunite the group of friends with Jeremy, who has been medevaced from the forest by helicopter.

There are a couple of great scenes in the movie but you really need to enjoy toilet humour, sometimes literally. One of the best scenes comes from Michael Eklund, playing an unnamed gas station clerk. This seems to be a common trend. While the scenes involving the core cast members are often humorous and frequently touching, the real laughs come when they interact with the various characters in the movie. Scenes with Aiden and his dad, Dr. Trimble, and the very, very, very crazy Sheryl brought some of the biggest smiles to my face.

In the end, this movie doesn’t try to hide what it is. It’s a late-night comedy that lays it all out for you. It’s never going to win awards, but it is a standout example is that sub-genre. 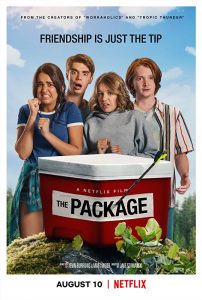 Movie description: A slip of a knife creates a painful situation as four friends race against the clock to return their friends very important package.