Tonight, my wife and I settled into Susanna Fogel’s The Spy Who Dumped Me starring Mila Kunis as Audrey and Kate McKinnon as Morgan. We had opted to wait to rent this film as the reviews were mixed, with a 49% on Rotten Tomatoes. Seeing it now, I regret waiting… this film was hilarious. I’ve seen reviews that say Kunis and McKinnon have no chemistry… I call bullshit. They were phenomenal together and it felt like we were just along for the ride. Director Susanna Fogel said, “”This is Bridesmaids meets Bond” and she couldn’t have described it any better. You could feel energy and excitement all the way through and it just seemed like Kunis and McKinnon were having fun, which shouldn’t be a surprise given their initial reactions to the script.

“I read all the scripts that were available in the known universe, and this one just jumped out at me as really fun, well-crafted, and really funny. I loved the friendships so much. I loved that they weren’t fighting with each other. It reminded me of my relationship with my very best friend of 22 years. I thought… I haven’t seen that recently. I want to do that.” – Kate McKinnon

“I have always wanted to do a badass girl action comedy. It was one of the funniest, most obnoxious, wonderful comedies that I had ever read and it was super badass. This could be two guys… it just so happens to be two kick-ass girls. Kate McKinnon was attached to it and I’ve been a fan of hers; she’s super funny, incredibly talented, and way funnier than I am” – Mila Kunis

The movie mainly stays in the present but throws in the occasional flashback to provide details around Audrey meeting her ex, Drew (Justin Theroux). We meet Audrey and Morgan during Audrey’s birthday party and we learn that Drew has dumped her by text. They decide to burn his stuff that was left behind at Audrey’s, so Morgan sends a text to let him know. Drew calls and asks them to stop, saying he’ll come by the next day to explain everything. This setup was a little slower than I was initially expecting but it provided good laughs and a great introduction to the story. The next day, Audrey, a cashier, meets a handsome Brit, Sebastian (played by Sam Heughan), who asks her to accompany him to his car after buying a pack of gum (nothing fishy there). They walk outside and, just as she makes a joke about making bad choices and opening the door to abduction, he asks her to get into the can where he and Duffer (Hasan Minhaj) reveal that Drew is a spy, that they are with the CIA, and they’re  trying to get access to something he had. They release Audrey who rushes back to her and Morgan’s apartment to tell her the story. Eventually, Drew shows up and the fireworks (or firefight) begin. From this point, the action and the laughs simply don’t stop and every single minute is a joy to watch.

I had two takeaways from this film. First, Kate McKinnon is one of the funniest people in film today. She was the funniest part of 2016’s Ghostbusters but, in this film, she stands out as a superstar. Secondly, I want to see more of Mila Kunis as the hero in action flicks. She’s always great but I want to see her in a late 80s, early 90s action reboot – perhaps Casey Ryback in a remake of Under Siege… that would be pretty awesome.

I was hoping to call out one or two of my favourite scenes but the movie was non-stop laughter and I really enjoyed all of it. I think my favourite part of the movie would have to be a toss up between the aerial fight between Morgan and Nadedja (played by Ivanna Saknho, who was absolutely amazing) or the hostel scene with Sebastian, Morgan, and Audrey, where Ólafur Darri Ólafsson had an amazing scene as a Finnish backpacker sharing their room.

This is one film where the majority of critics are getting it wrong. If you haven’t seen it and you enjoy both spy flicks and good comedy, put this at the top of your ‘to watch’ list. I could see myself buying this just because I already want to watch it again. 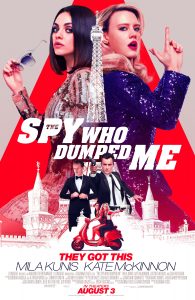 Movie title: The Spy Who Dumped Me

Movie description: Audrey (Mila Kunis) and Morgan (Kate McKinnon), two thirty-year-old best friends in Los Angeles, are thrust unexpectedly into an international conspiracy when Audrey’s ex-boyfriend shows up at their apartment with a team of deadly assassins on his trail. Surprising even themselves, the duo jump into action, on the run throughout Europe from assassins and a suspicious-but-charming British agent, as they hatch a plan to save the world.