Sometimes you come across a movie that you want to watch two or three times to ensure that you fully understand it. I watched the movie and I wondered if I was really prepared to review it, like I might be doing the film a disservice. After thinking about it, however, I think that I can say I recommend seeing this movie, but I also feel like it is only deserving of 2.5-stars. So, we should probably dig into that a bit and discuss it further.

As soon as I saw the concept for the film, I was in love with the idea. It is, for all intents and purposes, a legal drama. It is also, however, the most unique take on a legal drama that I’ve seen in a long time. So, credit goes to Mark Young for writing and directing the film. I’d love the opportunity to pick his brain on the thought process behind the movie. Unfortunately, I didn’t get the movie I wanted. I wanted something that fell into the dark comedy category and while the movie has been identified as both comedy and horror, it is neither. It is 100% drama with one or two laughs and no horror. It did sometimes feel like the composer wanted to score a horror film and just didn’t get their way. I would have loved more comedy in this and, even though it was a good movie, it just didn’t live up to my expectations.

The film follows Jimmy (Lew Temple), who instantly recognizable from a short stint on The Walking Dead, as a dead man stuck in Limbo awaiting a determination on whether he’s going to Heaven or Hell. He’s to be adjudicated by Balthazar (Lucian Charles Collier) and it seems like an open and shut case. Jimmy is a murderer and admits to it, but before the paperwork can be finalized Cassiel (Scottie Thompson) shows up to defend him. The film plays out as a series of flashbacks to Jimmy’s life and a legal argument between Balthazar and Cassiel. Cassiel’s main argument is one of redemption, that Jimmy has redeemed himself for his sins. In addition to these great actors, we get a number of very recognizable supporting actors including Richard Riehle as Phil the Court Stenographer, Peter Jacobson as Belial, and James Purefoy as Lucifer.

Other than the lack of comedy, my primary complaint is with the conclusion of the film. I find that a lot of films tend to get lazy at the end and leave films open ended. This film had a nice clean conclusion to what appeared to be the plot, but at the last moment it turned the tables and gave us the open ended conclusion that I find to be lazy. It wasn’t tied up nicely and left a lot of questions in my mind. I absolutely hate when a writer or director says that they intentionally left it up in the air so that the viewer could fill in the gaps. I came for a story, so tell me the story. Could you imagine if we ripped the final chapter out of every novel in a bookstore? It would be awful. So this is where the movie got away from me, I didn’t like how Young decided to wrap things up. I feel like an extra 15 minutes to provide a complete conclusion and bit more screen time for Richard Riehle as the comic relief could have easily turned this into a 4-star film.

That’s why I recommend seeing the movie. The ending was all that ruined it for me and it may not have the same affect on others. You may watch it and love the conclusion. Either way, I do think that after you see the ending, it is important to visit the film to watch it for a second time.

Limbo is available On Demand and DVD August 4. 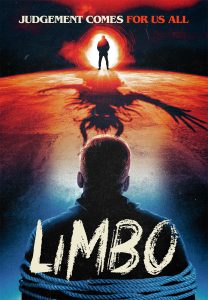 Movie description: A murderer finds himself on trial in Hell, caught between a bitter prosecutor and an inexperienced defense attorney.