Sometimes movies show up in my inbox and I’m not sure what to do with the information in front of me. In this case, I was greeted by an email with the subject line “Incestuous comedy CALL ME BROTHER.” Do you watch it? Do you not watch it? What do you do? Everyone thought I was crazy for not watching the incest-filled first season of Game of Thrones (then again because of that, I didn’t watch any of that show). Given that, I figured I’d watch it. After all, the film features Andrew Dismukes of SNL and writer Christina Parrish, so why not check it out.

The film tells the story of a brother and sister who found comfort in each other when they were younger and their parents would constantly fight. However, when their parents separate, the children are also separated and they go a decade before encountering each other again. They were the only support system each other had and that support was torn away from them during their formative years. When they are finally reunited, they are instantly drawn to each other and, as loners, they instantly resume supporting each other, except this time the powerful feelings of puberty play a role in their relationship. What you get is a disturbing, yet darkly amusing film.

I had the opportunity to speak to writer / actor Christina Parrish about the film and asked how the idea came to her.

I didn’t set out to write an incest movie I basically set out to write a story about the relationship between a brother and sister and it kind of just evolved into this thing of realizing there’s so much puberty to deal with when you’re near the same age.

Christina did point out that she drew on a lot of her own experiences although she clearly indicated that the incest was definitely not real life experience. I think that there’s a lot of people who can understand the concept of “any shelter in a storm,” which is the feeling I had watching the movie. There are times in your life when you need support and you turn to anyone around you, the addition of the romantic feelings was clearly to add dark humour and a raunchy aspect to the film, which worked quite well. You definitely feel uncomfortable watching the film and I wouldn’t recommend this as a family viewing experience. I asked Christina if that was her intended purpose, to convey that “any shelter in a storm feeling.”

The world building was important to me. I wanted the world to feel like it was so extreme, absurd, edgy, and vulgar and like kind of nasty. Then tagged along with this experience of having a difficult home life and fighting and bickering that there’s no place to find comfort in except for the relationship between the brother and sister. And I wanted them to find comfort in each other despite all this stuff going on in the background.

One thing I pointed out during our conversation was the reliance so many indie films have had on cell phones with text messages popping up on the screen to progress the story without human interaction. I was really glad that Call Me Brother didn’t have any of that, it was all face-to-face interaction. Christina agreed that she disliked that approach and stressed how important she thought the person to person communication was with even their facial expressions playing a major role in the progression of the story.

Call Me Brother went four years from filming during the 2016 election to release during the 2020 election, something that I find relatively amusing. I asked what it was like going on that four year journey and Christina commented that it was interesting and that she’s done a lot of other things in the interim. She said it was a nice reminder of where she was, what she was doing, and how she was thinking and reminded others looking to get into indie films that the process will be much longer than you expect. She also said something that I think is good advice for anyone, not just indie film makers.

Don’t be precious too much on the time because timing… it can be long, it can be short, it can be a journey.

At the end of the day, Call Me Brother, is an interesting look into Christina’s mind, the importance of support, and the difficulties of being a teenager. It is cute and comedic at times and disturbing and raunchy as well. It isn’t for everyone and it’s definitely a film that comes out of left field, but it’s also a film that grew on me. While the relationship in the film is taboo, the experiences our main characters go through are real and encountered by many other people and having the support to weather that storm can be critical. Then again, maybe I just loved the final scene because it had me in tears because I was laughing so hard. Either way, if you can stomach the concept… and I know most of you can since you had no problem watching Game of Thrones, give the movie a try, I think it might surprise you. There’s a lot of heart backed into that dirty, raunchy film.

Call Me Brother was released in theatres, drive-ins, and virtual theatres on November 6. 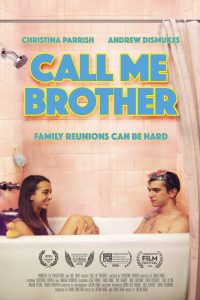 Movie description: A coming-of-age romantic comedy about a brother and sister in their late teens who are reunited after years of separation only to discover intimate feelings they struggle to confront. Between immature friends and dysfunctional parents, they find comfort in each other over a wistful and awkward summer weekend.

There are only two ways to live your life. One is as though nothing is a miracle. The other is as though everything is… This quote, often attributed to Albert Einstein, starts off The Secret: […]