I have always been a David Arquette fan, but I’ve never paid much attention to his career. If I see his named attached to a movie, I’m excited to watch it – he was one of the reasons why I checked out the recently released Spree. So, a documentary on David Arquette and wrestling definitely seemed like an interesting watch. It turns out that interesting was an understatement.

You Cannot Kill David Arquette is a documentary that looks at David Arquette’s WCW World Heavyweight Championship in 2000 while he was promoting the film Ready to Rumble. The win was contentious with fans angry that someone who hadn’t “paid their dues” had won the championship. It was seen as devaluing and has been listed in the past as a reason why WCW Nitro failed. This film picks up 17 years later, looking at David’s desire to return to the ring and redeem himself.

While the goal may be redemption, the film feels like insanity. David takes fights at a backyard wrestling night and travels to Mexico to try his hand at lucha libre. He trains at multiple gyms and builds his own ring in his backyard. As you watch the film, you learn that David has mental health problems and, it would appear, a fascination with oversized items. There were amazing scenes, gruesome scenes, and heartbreaking scenes. The film is filed with highs and lows, ups and downs.

There are scenes that are pretty frightening, viewer discretion is highly recommended. I suspect that some of the wrestling David takes part in might not be entirely above board. At times, it is painful to watch and I can’t imagine what his family was experiencing. I can understand feeling like you need to do something, but at what price. Honestly, David’s logic and reasoning reminded me of the scenes from Friends between Jon Favreau and Arquette’s ex-wife, Courtney Cox. I felt there were some parallels between Favreau’s character’s desire to be an MMA champion and David’s desire to be a wrestler.

One random, amusing aspect of the film is the similarity between Courtney Cox and David’s wife, Christina McLarty. At times, we actually had to pause the film to figure out which woman was on the screen.

At the end of the day, the documentary is fun, entertaining, and quite informational. You learn a lot about David Arquette and how his mind works. You can see how eager he is to find that redemption. At the same time, because of the wrestling association, you wonder how much of it is real and how much of it was staged for the sake of the the film. I want to believe that the story is real, simply because it is an incredible story.

You Cannot Kill David Arquette was released in drive-in theatres on August 21 and will be released on VOD on August 28, 2020. 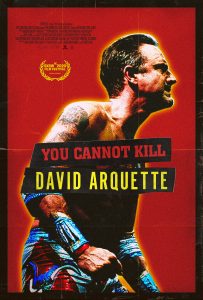 Movie description: Branded as the most hated man in wrestling after winning a highly controversial WCW World Heavyweight Championship in 2000, actor David Arquette attempts a rocky return to the sport that stalled his promising Hollywood career. Dangerously determined to redeem his reputation and reclaim his self-respect, Arquette will stop at nothing to earn his place in professional wrestling.