This is the longest that I’ve ever dwelled on a movie before writing about it. I think the film actually left me in a state of shock and, while I wanted to drop my review prior to the film’s release date, I needed more time to come to terms with it. Since the movie is now available, here’s my one liner: Watch this film!

This movie was, in my opinion, jaw dropping. Previously, I had watched and reviewed RJLE Film’s Ride, another thriller involving a ride sharing app. Combine that with IFC’s recent release of Dave Franco’s The Rental and you have to wonder what’s next when it comes to thrillers that look at the sharing economy. Spree, however, takes the genre, which I’m going to call sharing economy thrillers, to new heights. The film shows us just how ridiculous social media is and how scary it is to be a user of a sharing economy service in this day and age.

Spree is a movie I’ve been yearning to share with the world for a long time. As a satire of an influencer culture gone mad and the numbing violence that characterizes modern day America, I hope it can offer a new window of critique into some of our society’s most frightening maladies.

The film follows Kurt (Joe Keery) who has been on social media for years, waiting to become an influencer and have his content go viral. Kurt makes money by driving for a ride sharing app known as Spree and is so desperate for likes and follows, that begs his customers to follow him on social media – “Follow me and I’ll follow you back.” Kurt finally figures how just how to go viral with #thelesson, a sinister plan to get views. What is #thelesson? You’ll have to watch the movie to find out. The film is filled with recognizable names and faces including Sasheer Zamata, David Arquette, Mischa Barton, Frankie Grande, Lala Kent, Josh Ovalle, and Kyle Mooney.

The film really looks at how society’s focus on social media can go horribly wrong and the risks you take when you put your trust in a stranger via ride sharing services. When the film ended, my wife looked up and said, “First The Rental scared me off Airbnb, now I’m not sure I want to ride in an Uber again.” Sure, these films are works of fiction, but there’s an underlying truth in them that makes them scary. When I watch Nightmare on Elm Street, I know that there’s not a guy coming to kill me in my dreams. I can’t say that I won’t get a psychotic driver that wants to kill somebody when I order a ride share. That’s what makes this so disconcerting… between cancel culture, desires for overnight fame and fortune, and an unreasonable amount of self worth being associated with follower counts… it’s scary to think about what a mentally unstable person could do. Given the world we live in, I could easily see an attention seeking 20-something live streaming murder to grow their follower count.

Social media has warped not only our sense of identity and morality, but our value systems and has all sorts of ramifications that film has yet to fully process. Attention at any cost seems to be the name of the game, and cinema has the perfect tools to explore that.

While the film is conceptually frightening because it feels like it could happen, there are two things that really bring it all together. The first is the cinematography. The use of smartphone cameras, application interfaces, and GoPros to tell the entire story was quite impressive and very immersive. The entire movie feels like you’re watching a series of streams and feeds that have been cut together. At no point does it feel like you’re simply watching a movie with actors. Which brings us to the second thing that brings the film together – Joe Keery. Steve Harrington is one of the best parts of Stranger Things and this film highlights that so much of the brilliance of the character is brought to us by the actor. Keery is absolutely brilliant and believable in the role of Kurt. It’s almost frightening how well he plays it. If you aren’t a fan of thrillers and you don’t want to see this movie, I would ask you to reconsider just for his performance. It’s hard to believe that he’s an actor and not an unhinged 20-something named Kurt.

Our lead, Joe Keery, and I spent many hours poring over videos of popular influencers, unknown wannabes, and the media footprint of mass murderers, looking at where the character of Kurt fit in the nexus of this Venn Diagram. We approached the role with a seriousness of responsibility towards the subject matter, a sensitivity towards the character, and a sense of humor towards the critique.

Finally, we need to talk about two other key roles in this film. The first is David Arquette as Kurt’s father, Kris. He pops in and out of the story and feels like an absentee father who treats his son like a disruption to his party boy lifestyle. Kris is a DJ and there’s clearly a broken relationship between him and Kurt – watching the film I felt like that Kris resented Kurt for coming into his life, but that Kurt resented Kris even more for being absent. It was an interesting dynamic that I may be reading too much into for a thriller that wasn’t necessarily focused on the family bond, but I think it played an important role in the person that Kurt became and enjoyed the way their interactions played out.

The other vital role is that of Sasheer Zamata who plays comedian Jessie Adams. I felt like it was important to end my review with Zamata since she gives us the best ending we could get from Spree. Jessie is a passenger of Kurt’s and has a huge social media following, one that Kurt wants to leverage to gain more followers. Her story is an interesting contrast to Kurt’s and, as movies tend to do, it ultimately brings the two of them together for an amazing climax.

I could discuss a number of scenes within the film in depth and would love to have those conversations, but that would ruin my rule of no spoilers. So, that’s where I’ll have to leave this review. I cannot recommend this film enough. In fact, in writing this review, I raised it from 4.5-stars to 5-stars because I realize just how impressed with it as I am.

Spree was released in theatres, drive-ins, on demand and digital on August 14. 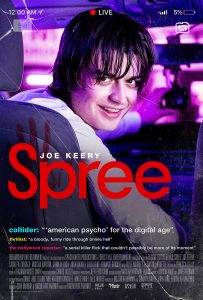 Movie description: Meet Kurt (Joe Keery), a 23-year-old rideshare driver for Spree, who is so desperate for social media attention that he'll stop at nothing to go viral. He comes up with a plan to livestream a rampage as a shortcut to infamy - coining his evil scheme "#thelesson", he installs a set of cameras in his car and begins streaming his rides. Wildly miscalculating the popularity that would come from his lethal scheme, Kurt’s desperation grows as he tries to find a way to overcome the plan's flaws. In the middle of all this madness, a stand-up comedian (Sasheer Zamata) with her own viral agenda crosses Kurt's path and becomes the only hope to put a stop to his misguided carnage.

There was a lot of talk about Venom when it came out, mostly because of the back and forth with A Star is Born and the negative reviews fans were leaving on the opposite films. Everyone […]