Finding Steve McQueen tells the “true story” of the 1972 heist of the United California Bank in Laguna Niguel by a gang from Youngstown, Ohio. I wrap true story in quotes because there’s clearly differences between this movie version and the details available online, although there are discrepancies across the various accounts I could find online as well. The story is told from the point of view of Harry Barber (played by Travis Fimmel from Vikings), who is referenced in most write-ups as being the getaway driver, but in the film helps solve a number of problems with ingenious solutions while also appearing very naive. Harry is obsessed with Steve McQueen, often telling people it is his name in the film, hence the name of the movie.

In 1972, a group of bank burglars (often misattributed as bank robbers) spent a weekend breaking into the United California Bank. They climbed onto the roof of the bank, cut through the roof until they had access to the top of the vault, and used dynamite to blast a hole in the vault. There are varied reports of the exact amount that they stole, but the rumour is they were after a $30 million slush fund belonging to President Richard Nixon that was stored in the bank. By all accounts, the plan was brilliant and they were only caught due to a ridiculous blunder that seems like it could appear on an episode of America’s Dumbest Criminals.

The film, as I mentioned, follows Harry Barber before the heist, during the heist, and after the heist through a series of time jumps as he tells the story to his girlfriend Molly (played by Rachael Taylor from Jessica Jones). Harry’s life contains constant references to Steve McQueen from posters on his wall, to the name he gives the cop that pulls him over, to his love for racing cars. Bullitt is an incredible film and I feel like Harry’s car chase in Finding Steve McQueen was a great homage to the film. I also noticed that they referenced the car from Bullitt in conversation in the movie, I thought this was a nice touch.

There are definitely romantic and comedic elements to the film with a lot of the comedy coming at the start of the film in the pre-heist scenes and the bulk of the romance coming from the post heist scenes between Molly and Harry. I laughed out loud a few times at the beginning of the film, found myself on the edge of my seat during the middle, and thought the romance at the end was sweet. A movie that is able to transition so cleanly is a good movie in my books.

I was definitely disappointed with the summary points displayed at the end of the film. One of my favourite parts of any true story is the summary at the end with the “where are they now” type statements. While they referenced the time Harry did and random facts about Steven McQueen (that felt like filler for a lack of real bullet points), I wanted more out of it. Was Molly real? What happened to others involved, like Harry’s brother, Tommy (played by Jake Weary from Animal Kingdom)? There’s enough gaps that I want to check out the previous documentary on the subject and possibly Amil Dinsio’s book on the subject, Inside the Vault.

Beyond the great cast members mentioned above, it is always awesome to see William Fichtner (Prison Break) and Forest Whitaker (Ghost Dog, The Last King of Scotland) in a movie, they are both incredible actors. At the end of the day, this was a really enjoyable movie and worth checking out. It’ll be available in theatres and on demand on March 15. 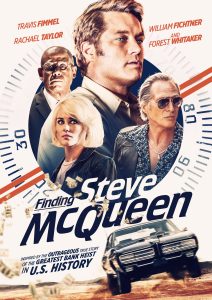 Movie description: Inspired by the true story of the biggest bank heist of all time, Harry Barber (Travis Fimmel) recounts how in 1972 a gang of close-knit thieves from Youngstown, Ohio attempted to steal $30 Million in illegal campaign contributions from President Richard Nixon's secret fund. But the plan quickly goes sideways, prompting the biggest manhunt in FBI history with more than 125 agents assigned to the case.