Sometimes you come across a movie so bad that you have to laugh. That’s how I felt about WrestleMassacre. The film appears to have been shot without a budget, potentially with cell phones. There is no cinematography, just footage. That said, before I discuss my thoughts on the film, it is probably worth discussing the premise of the film. The film centres around Randy (Richie Acevedo), a Cuban landscaper who wants to be a professional wrestler and has an unhealthy obsession with the women whose yards he maintains. Everyone in the film is someone connected back to Randy. You have customers Owen (Julio Bana Fernandez) and Becky (Rosanna Nelson) – Owen is in debt to the local loan shark, Mr. Valentine (Nicholas Yoder II), and Randy is in love with Becky. Then you have the owner of the local wrestling school that Randy wants to attend, the owner of the company where Randy works, and Randy’s dad (Josip Peruzovic). There are lots of branches off these connections, but most importantly everyone eventually tracks back to Randy and treats him like garbage, which will be important when the movie finally decides to be a horror movie.

Now, let’s discuss a few aspects of the film. For the horror fans, the gore is a lot of fun. This movie isn’t about jump scares or psychological horror, it’s all gore and the practical effects are entertaining. If the movie had stuck to that, it would have been great… unfortunately, it didn’t. The writer decided to spend the first 45 minutes “setting up the story”, which was really just a lot of cringe-worthy attempts at humour that never really landed. From attempts at political humour to sexual humour, the jokes continuously fall flat, sometimes inspiring winces from the viewer. At first, I thought it was bad writing from a tone deaf writer, but you quickly realize that there are themes of humour running through the movie that just aren’t funny. These weren’t happy accidents, rather they were deliberate attempt at the “jokes”.

That said, the film will find audiences. Like I said, the second half of the film is filled with a lot of fun gore. Given the plethora of wrestling knowledge on the cast, it’s no surprise that the wrestling-inspired executions are well orchestrated and amusing to watch. At this point, I actually did laugh because while you have gore, it is very campy, very entertaining gore. In other words, when there was little to no dialogue, the film was actually decent to watch. Personally, I enjoyed seeing Nikolai Volkoff on the screen, as he’s a wrestler I grew up with. There are plenty of wrestling cameos across the generations from Volkoff and Jimmy Valiant to Tony Atlas to The Sandman and the Cuban Assassin. It’s enough that any wrestling fan is sure to check this film out, especially if they’re also a fan of gore.

At the end of the day, this isn’t a great movie, but the campy gore makes the second half a fun watch. Check it out on June 16. 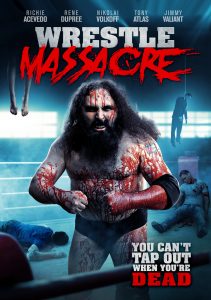 Movie description: Randy is an awkward groundskeeper who is obsessed with professional wrestling. Longing for a sense of belonging with grandiose dreams of becoming a wrestling superstar, he is only met with abject humiliation. A brutal shaming at a local wrestling school pushes Randy over the edge and sets out on a blood soaked rampage to punish those who wronged him.

When I look at movies, there are things that will often make me do a double take. For example, when I first heard that Simon Pegg would play Scotty in the Star Trek reboot, I […]