I went into Hard Luck Love Song not expecting a whole lot. I’m not sure if it was low expectations or incredible film quality, but I really enjoyed what I watched.  I’m going to assume it was the film quality because the main character, Jesse (Michael Dorman) was incredible. Dorman brought so much character and charisma to the screen that it was impossible not to fall in love with him (and everyone he meets on screen does just that).

This film is also a love letter to modern Americana music and the colorful characters who inhabit that world. As in life, things are not always as they first appear and I find that especially true in our story, where characters have complicated layers and a depth that is uniquely compelling. Those nuanced characters start with charismatic but down-on-his-luck troubadour, Jesse (Michael Dorman). A deeply flawed everyman, Jesse finds himself at an existential crossroads as bad decisions catch up with him during an unexpected reunion with Carla (Sophia Bush), an old flame.

The film is based on the song Just Like Old Times by Todd Snider and if you know the song and watch the film, you can literally watch each verse of the song play out. Honestly, this was one of the most incredible aspects of the film. It mapped out so beautifully on screen, that it was almost eerie to watch it all come together… perhaps hauntingly beautiful is a better way to put it. The film’s soundtrack is a treat and the music flows with the scenes perfectly.

The biggest standout though is the cast. Michael Dorman as Jesse and Sophia Bush as Carla are perfect for each other and the film. Their characters show so much emotion that you want everything to work out, you want them to survive. The supporting cast including Dermot Mulroney, RZA, and Eric Roberts were all incredible. Mulroney and Roberts were so far outside the roles I traditional see them in, that it was a joy to watch them perform. Mulroney was the scariest I’ve seen him… it definitely wasn’t a romcom moment for him and Roberts was someone that I want to track down and have a drink or three with. The standout star of the supporting cast, however, was Brian Sacca as Officer Zach. He’s the writer behind Buffaloed, a film that I previously reviewed on this site. He provided the perfect comic relief to the film. The character was well written and Sacca performed incredibly. I loved that the officer’s name was Zach because he very much reminded me of Zach Galifianakis on screen.

There are two scenes, I don’t want to spoil them… but I do want to call attention to them. The first involves Jesse and Carla in a hotel room just after we meet Office Zach. The raw emotion that they portray is gripping, it is painful to watch, but incredible to see. I felt like I was watching something real happen, like I was a fly on the wall in a run down motel room and I felt guilty for being so close to something so intimate. The other involves RZA as Louis and Officer Zach. While Officer Zach isn’t immediately in the scene, RZA does a great job in his role. The interaction between him and Carla, then him and Jesse, and finally him and Officer Zach is scary, nail biting, and finally humorous. It is a few minutes that takes you through a whirlwind of emotion.

Whether you love small town love stories, great music, or just a bit of western-esque fun, Hard Luck Love Song is likely a great film for you.

Check it out in theatres on October 15. 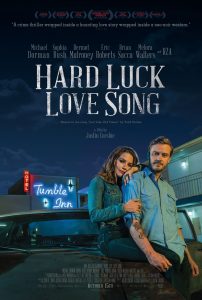 Movie description: ‘A crime thriller wrapped inside a haunting love story wrapped inside a neo-noir western,’ HARD LUCK LOVE SONG follows Jesse (Michael Dorman), a charismatic but down on his luck troubadour hustling pool in dive bars, living out of cheap motels and making bad decisions. The award-winning feature film debut from writer/director Justin Corsbie is based on the song, “Just Like Old Times” by acclaimed Americana singer/songwriter Todd Snider, and stars Dorman, Sophia Bush, Dermot Mulroney, Brian Sacca, Melora Walters, Academy Award nominee Eric Roberts and hip-hop icon RZA. Jesse finds himself at an existential crossroads during a chance encounter with Carla (Bush), an old flame, as their complicated past and current troubles threaten to destroy their blissful reunion. HARD LUCK LOVE SONG captures a fractured optimism where characters navigate the choppy waters of life, searching for their ‘own kind of American Dream.’

Dashcam is an interesting film. I’m not sure if it uses the Screenlife technology or not, but much of the film plays out like Screenlife films. This is a concept that I’ve fallen in love […]