I Love Lucy. That’s all you need to say and, regardless of generational divide, a scene will flash into everyone’s mind. It might be a woman stomping grapes with her feet, a couple knocking each other off a piano bench, or that famous line, “Lucy, I’m home.” Lucille Ball and Desi Arnaz gave us a series that has stood the test of time, a series that is adored by all. Being the Ricardos presents an opportunity for us to get a sneak peak into their famous show and the impact it had on their lives.

The film casts Nicole Kidman as Lucille Ball and Javier Bardem as Desi Arnaz. When the trailers first showed up, I was concerned that I could only see Kidman when I looked at the screen, I didn’t see Ball. In the film, however, that all changed. The film is a mix of colour and black and white. With the black and white scenes reserved for reshot scenes from the show. In these scenes, I often had to do a double take, at first I thought it was actual footage from the series rather than a recreation of the scene. In the film, Kidman becomes Ball and the transformation is amazing. I have less of a defined image of Arnaz in my head, so Bardem filled the role perfectly.

Another perfect casting was, in my opinion, J.K. Simmons as William Frawley aka Fred Mertz. I may be biased here because Simmons is one of my favourite actors, but like Kidman, I often forgot that I wasn’t looking at the actual actor. I’d be remiss not to mention Nina Arianda as Vivian Vance aka Ethel Mertz, but I don’t have much of a memory of Ethel nor was I overly familiar with Arianda, so I can’t comment on her transformation, but she played the role beautifully. Finally, it was great to see two of my favourite Arrested Development cast members on screen. Tony Hale is always fun to watch and Alia Shawkat is incredible on screen with every role she plays.

I like claustrophobic spaces and short periods of time. So the idea of setting most of the film during a production week of ‘I Love Lucy’ appealed to me. It became a matter of gathering
enough information to create an interesting story.

One of the best aspects of the film is the jumping around. We’re seeing a week in the life of Lucy and Desi play out. A fictional week comprised of events that happened at different times, compressed into this small window to tell more story and make things more interesting. On top of the never ending pile of problems – all real events from the lives of Lucy and Desi – we get flashbacks that show us their lives before the show and before the current filming week. Sometimes it takes the viewer a moment to realize that the time jump has happened. This is my only real criticism and the only reason why I’m giving the film 4.5-stars instead of 5. With that said, even though the film jumps around, that just heightens the tension and pulls you in. One of the most interesting aspects of the film is how much ground is covered and how much of the story you see. It was fantastic and a ton of fun to watch.

Being the Ricardos was released in theatres on December 10 and on Prime Video on December 21. 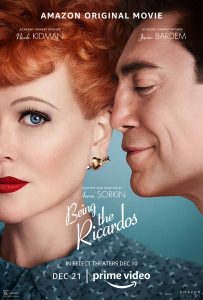 Movie title: Being the Ricardos

Movie description: Lucille Ball (Nicole Kidman) and Desi Arnaz (Javier Bardem) are threatened by shocking personal accusations, a political smear and cultural taboos in Academy Award®-winning writer and director Aaron Sorkin’s behind-the-scenes drama Being the Ricardos. A revealing glimpse of the couple’s complex romantic and professional relationship, the film takes audiences into the writers’ room, onto the soundstage and behind closed doors with Ball and Arnaz during one critical production week of their groundbreaking sitcom “I Love Lucy.” Featuring J.K. Simmons and Nina Arianda.

A friend, whose opinion I greatly respect, mentioned Stan & Ollie a couple of times and spoke very highly of the film, so I knew I had to check it out. This weekend finally presented […]