There was a lot of talk about Venom when it came out, mostly because of the back and forth with A Star is Born and the negative reviews fans were leaving on the opposite films. Everyone told me that I’d love the move, but I opted not to see it in theatres. I find there are very few Marvel movies that I consider to be great films and none of the other movies have lived up to Deadpool or Logan. A lot of people talk about Black Panther, Avengers: Infinity War, or, even, Thor: Ragnarok as being great movies and I’m not quite sure that they are there yet. They are great comic book movies, even good action movies, but I’m not sure they are great movies. Deadpool is a comedic masterpiece and Logan is probably the best film made to date in the superhero realm. Venom was decent, probably somewhere between Ant-Man (good) and Ant-Man and The Wasp (ok). It was, in fact, better than I expected.

Tom Hardy did a great job as Venom. Michelle Williams was also great and anytime you see Woody Harrelson, no matter how much screen time he gets, is a good day. The rest of the cast, I wasn’t impressed either way. They were there, they did their job, they weren’t bad, they just didn’t stand out either.

The comedic aspects, something I wouldn’t have originally expected, were what really made this film. The inner dialogue between Eddie Brock and Venom kept me watching. Don’t get me wrong, the action was good, but it wasn’t anything spectacular. The conversations between Eddie and Venom, however, were incredible. The scenes in the convenience store with Mrs. Chen were some great movie moments, particularly at the end of the film.

I pre-ordered this film, so that I could watch it as soon as it came out after it left theatres. While I wouldn’t pay $50 for my wife and I to see it at the cinema, I felt that $25 to see it at home was probably the correct price point. In hindsight, this was really more of a $5.99 rental. When Thor: Ragnarok came out, I waited for it to appear on Netflix before I watched it… Venom might be a good one to leave to appear on a streaming service if you’re not big on superhero movies, but if you’re a superhero fan, you’re safe with the rental at this point. 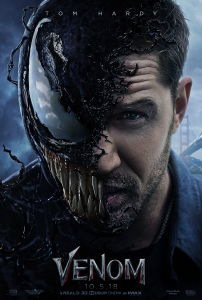 Movie description: A failed reporter is bonded to an alien entity, one of many entities who have invaded Earth. But the entity takes a liking to Earth and decides to protect it.

Last year, Netflix hit a Christmas home run by releasing movies with two of my favourite CW stars – The 100‘s Eliza Taylor in Christmas Inheritance and iZombie‘s Rose McIver in A Christmas Prince. So […]