I’m a sucker for anything that says based on a true story. I’m not sure what it is, but I find it that much more interesting when I know that there’s a kernel of truth. Firebird is based on the memoirs of Russian actor Sergey Fetisov, who you can read more about on the film’s official website. The Soviet Union’s Article 121 of the criminal code punished gay men with up to 5 years in prison and and the film tells the story of two soldiers who fall in love while stationed at an Air Force base in Estonia during the 1970s. One of those soldiers represents Fetisov.

In the film, Sergey is finishing out his mandatory military service, determined to leave, even though his command desires that he stay. When Roman, a pilot, arrives at the base, there is instant chemistry as the two bond over a love of photography. While the two men are clearly attracted to each other, the attraction is forbidden and, as such, Sergey’s friend Luisa ends up between the two men. Sergey is pushed toward Luisa by his best friend on the base, while Roman appears to be drawn to her in an effort to keep up appearances. When someone reports that Roman may be having relations with another man on the base, he and Sergey maintain distance, but as the film jumps forward in time, we see them reunite and rekindle their romance. I won’t say anymore, as I don’t want to spoil the entire film.

While I love true stories, I found this film difficult to watch. The cast all had heavy accents and I struggled at times to understand them. This is a film concept that I often struggle with. Clearly, English is not meant to be the native language in this story, but the cast all speaks heavily accented English. I would prefer the actors all spoke Russian and the film have subtitles. Typically, when I come across a film like this, I’ll turn on the closed captioning in order to catch everything that is said. In this case, however, closed captioning were not available to me and I had to struggle to understand what was being said. I would say that I was able to get about 75% of the film, which might count for the rating being lower than I expected based on the film’s premise.

I will say that it was beautifully shot and I felt like I was looking at the past. At no point did I have to suspend my disbelief, which is always a positive. I also found that the characters were all quite believable. I didn’t question the chemistry between the actors nor did I feel they did not belong in their roles. This is always an added bonus, especially when the film is fixed in reality.

At the end of the day, it was just very difficult to get past the heavily accented English and that was enough to spoil the experience for me. I recommend checking out the film if you can handle that, as the content was very interesting. I actually found myself getting angry that I was missing moments of the film because I was so intrigued, but even after rewinding, I could not tell what was said in some of the scenes.

Firebird was released in theaters on April 29. 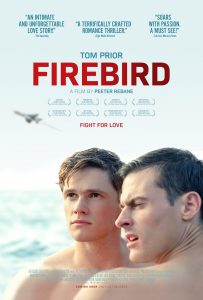 Movie description: Based on a true story during the Cold War, Firebird is a passionate love story set against the backdrop of an Air Force base in occupied Estonia during late 1970’s Communist rule. Sergey (Tom Prior), a soulful, young soldier who dreams of becoming an actor in Moscow, is counting the days until his military service ends. His life is turned upside down when he locks eyes with Roman (Oleg Zagorodnii), a sexy, enigmatic ace fighter pilot newly assigned to his base. Driven by their undeniable attraction, Sergey and Roman navigate the precarious line between love and friendship at a time when Soviet men in uniform caught having a sexual affair was met with the severest punishment. As their friendship grows into love, the men risk their freedom and their lives to be together in the face of an all-seeing Communist regime

The past couple of years, I’ve been wondering if Hallmark will lose their crown as the King of Christmas films. The streaming services have been killing it with great films and they make it much […]