The description of The Night Clerk made me think that I knew exactly what to expect. It seemed like a very straight forward film. I can’t say that I was super excited to see the movie, but it had a recognizable cast, so I decided to give it a go. I was actually quite surprised. The movie comes complete with a twist that is nearly up there with Gone Girl. I wanted a little more closure with the conclusion; the final scene didn’t quite make sense to me, but other than that I was pleasantly surprised and enjoyed the film.

As I mentioned, my draw was the casting. Tye Sheridan and Ana de Armas were great choices for the leading roles. Sheridan is instantly recognizable from recent X-Men films and Ready Player One and de Armas was the only good part of Knives Out. They were supported by John Leguizamo, who I loved when I saw him recently in Playing with Fire, and Helen Hunt, who will forever be Jamie Buchman from Mad About You. It may not be “all-star casting”, but they are all incredible actors that deliver with their performances.

Sheridan plays the lead character, Bart, a hotel night clerk with Asperger’s. I’ve noticed a trend recently in films and television featuring a lead character on the spectrum. Atypical starring Keir Gilchrist, The Good Doctor with Freddie Highmore, and The Fanatic featuring John Travolta are among the more recent releases. As an outsider to the Autism spectrum, I always find these performances to be highly impressive and find myself in awe of the actors ability to portray the characters, but I would love to see a review from someone more familiar with the subject to get their take on how these characters are portrayed.

In the film, Bart is eager to improve his social interaction as it is, in his words, awkward. To do so, he acquires cheap spy cameras and places them in the rooms at the hotel, allowing him to spy on the guests. He watches these recordings – interacting with them and mimicking the guests in an attempt to appear more “normal”. It also unexpectedly makes him a murder witness, which forms the premise of the movie. His reaction to the murder and interaction with the victim and law enforcement makes him a prime suspect with the investigating detective (Leguizamo). Most of the movie follows Bart as he makes his first romantic connection with hotel guest Andrea (de Armas) while the investigation is ongoing.

There were a few moments of the movie I didn’t get. One of those is the final scene, but I won’t spoil that. The other involves Bart and his mother (Hunt). He lives in the basement of her home, but does not eat dinner with her – instead she leaves his meals on the stairs and he gets them after she has left. This is never fully explained and I would have loved to have better understood this interaction. I realize it was needed to create some of the intrigue in the film as it allows Bart more time alone, but I would have liked to know why they find themselves in that dining situation.

One odd note. The movie introduced me to a term I had never heard before – technosexual. It was worked into conversation so casually that I had to rewind to make sure I had heard correctly. Even after looking up the definition, I’m not sure it was used in the same sense in the film, but it was an interesting term to hear none-the-less.

The movie is enjoyable, quirky, and presents an interesting twist. I would recommend checking it out. It’s available in select theaters, on demand, and digital on February 21. 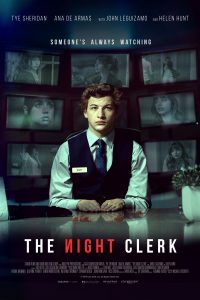 Movie description: Tye Sheridan stars as Hotel night clerk Bart Bromley who is a highly intelligent young man on the Autism spectrum. When a woman is murdered during his shift, Bart becomes the prime suspect. As the police investigation closes in, Bart makes a personal connection with a beautiful guest named Andrea (Ana De Armas), but soon realizes he must stop the real murderer before she becomes the next victim. Also Starring Helen Hunt as Ethel Bromley and John Leguizamo as Detective Espada.