On IMDB, Val Kilmer’s Known For list includes The Doors, The Saint, Kiss Kiss Bang Bang, and The Salton Sea. For me, it will always be Real Genius, Top Gun, and, most importantly, Tombstone. I think that’s one of the coolest things about Kilmer, with 105 actor credits on IMDB, there’s something for everyone. I’m sure if I asked my mom, she’d mention At First Sight and watching this documentary I learned of films like Top Secret! and Cinema Twain. There a lot of gems on Kilmer’s resume.

There’s also a lot of stories. There are tons of articles and videos about how difficult Kilmer is to work with – how he has ruined sets, angered others, and just acted like a diva. Watching this documentary was a real eye opener into who Val Kilmer really is and what he hoped to accomplish when he set out on his acting journey. I knew about Val Kilmer the actor. I learned about Val Kilmer the artist, the poet, and the person through this film. My next personal purchase will definitely be his book of poetry, sold by A24 films, with a goal of one day getting it signed. The more I know about Kilmer, the more I want to know about him… the more impressed I am with him as a person.

One of the most interesting aspects of the film was the sheer amount of footage that Kilmer has amassed over the years. He was always recording. In many ways, it reminded me of the Zappa documentary. I’m not sure that there’s any pre-smartphone video footage of me floating around, so the quantity of footage some people have is very impressive. That’s what makes this film feel personal – all the home videos, the behind the scenes looks, and the intimate moments that Kilmer captured and shared with us. Another great aspect of the film is the narration. While we do hear Kilmer speak from time to time, the film is narrated by his son, Jack Kilmer. The younger Kilmer does a fantastic job of providing a voice to the film. For those of you that are unaware, Kilmer battled throat cancer and has had multiple tracheotomies, making it difficult for him to speak.

A moment that really touched me in the documentary occurs when Kilmer attends and outdoor screening of Tombstone and signs autographs afterwards. The early 90s were a great time for westerns and we got back-to-back Wyatt Earp films with Tombstone in ’93 and Wyatt Earp in ’94. I would have been 11 when Tombstone was released and it is one of the first times that I can remember being genuinely impressed with an actors performance. At that age, it just wasn’t something I thought about, but Kilmer as Doc Holliday has stuck with me ever since. Back to the documentary, Kilmer is at this screening, signing autographs and afterward he talks about how he feels being there and doing this. It was moving and brought a tear to my eye, partially because of the film and partially because of his words. It was a very powerful moment.

My biggest takeaway from this thing is to always look at things positively. I feel like that is, in some ways, Kilmer’s message. He hasn’t let the cancer or the loss of his voice beat him down. He didn’t let almost going bankrupt destroy him. He didn’t let his reputation hold him back. It’s a powerful story that looks inside a major Hollywood name in a way that we don’t often seen. In a time when we feel more connected than ever to the celebrities we adore, this film shines a light on how little is truly exposed via social media and how much there is to see when you look behind the curtain.

Val was released in theatres on July 23 and will be released on Prime Video on August 6. 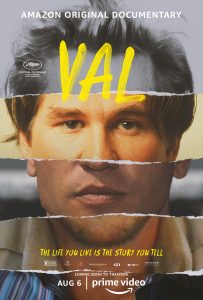 Movie description: For over 40 years Val Kilmer, one of Hollywood’s most mercurial and/or misunderstood actors has been documenting his own life and craft through film and video. He has amassed thousands of hours of footage, from 16mm home movies made with his brothers, to time spent in iconic roles for blockbuster movies like Top Gun, The Doors, Tombstone, and Batman Forever. This raw, wildly original and unflinching documentary reveals a life lived to extremes and a heart-filled, sometimes hilarious look at what it means to be an artist and a complex man.

As the credits rolled, my wife and I looked at each other and asked what we had just watched. Echo Boomers feels like it will never end. It’s not that it is a bad movie – […]