Tonight being Halloween, a horror movie was in order. I sent my wife out of the room, turned off the lights, and turned on The Howling – Joe Dante’s 1981 classic. My wife had actually purchased me the DVD for Christmas but upon discovering that Dee Wallace would be at a con in the near future, I decided to watch it ahead of time.

The film starts with reporter Karen White (played by Dee Wallace – while she has an impressive resume, I’ll always remember her as Elliott’s mom in E.T.) as she works with police to help them catch a suspected serial killer who has been calling her. The suspected serial killer, Eddie, was a surprise to me because I wasn’t expecting to come across Robert Picardo in this film. Just as Eddie is about to attack Karen, the cops shoot him. The experience was so traumatic that Karen blocks the memory of what has happened. Dr George Waggner (Patrick Macnee) recommends that Karen get away for a week or two to decompress and sends her and her husband, Bill Neill (Christopher Stone), to a retreat he runs called the Colony. The Colony, however, is more than it appears to be and Karen finds herself more afraid than she was at home.

Given the age of the movie, I’m going to assume that some mild spoilers are acceptable. If you disagree, let me say that I enjoyed the movie and recommend watching it… otherwise, keep reading.

At the Colony, we meet a number of odd characters including Marsha (Elisabeth Brooks) who attempts to seduce Bill. The tension is growing between Bill and Karen and clearly something isn’t right at the Colony, everyone is just a little too weird. As things continue to get weirder, she calls her friends Terry and Chris to come up to the Colony as she is concerned and afraid of what is going on. Chris sends Terry alone, which doesn’t work out so well for her and, by the time Chris makes it to the Colony, Karen is the only one left to save.

There were a few times that I felt the movies age. One moment was Fred’s comment on the telephone after Karen froze during a newscast appearance shortly after she was attacked. His explanation was, “Who Knows? Maybe she’s pregnant.” That felt like a line straight out of the 80’s. The second one made me chuckle and it occurs when Chris is rushing to the Colony and stops to buy gas, the guy in front of him at the pumps says, “Take it easy, pal. Not all of us got enough money for a Mazda.” Something about a Mazda being a luxury car made me grin.

Speaking of laughs, the scene in Waggner’s office between Eddie and Karen was amazing. When Eddie says, “I’m gonna give you a piece of my mind. I trusted you, Karen.” and then pulls a piece of brain out of the bullet hole, I actually laughed out loud. It was, by far, one of my favourite scenes of the movie.  I was also very impressed with the wolf transition in that scene. The very detailed, slow transformation of Eddie into a wolf was amazing, I found myself absolutely fascinated with the effects.

The ending of the movie was equally impressive. The scene with Karen and Chris is the newsroom actually brought me to the edge of my seat, I did not see it coming and was in awe of the story choices that were made. The final scene brings back Marsha for one last moment, which had me excited that she would be returning in The Howling 2 – I read online, however, that, while she was scheduled to appear, Elisabeth Brooks pulled out due to illness.

The movie had a few jump scares, but it also had great music, awesome effects, and a compelling story. I always rate movies before I write them up and, in this case, I scored this as 3.5 stars. However, while I was writing this, I convinced myself that it was a 4 star movie, primarily due to the wolf transformation effects. I could definitely sit down and watch it again. 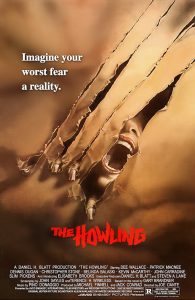 Movie description: Looking to relax after a rough encounter with a suspected serial killer, a reporter is sent to an experimental resort. The trip isn't as relaxing as she had hoped.

FINALLY! I finally saw Captain Marvel, a movie I’ve been waiting to see since it premiered in theatres. I had tickets for opening night, but a bug kept me from seeing it. A few days later, […]