“Kids vs. Aliens” was inspired by wild childhood antics with my sister and brother, making backyard films with my friends, and being carried away by local folklore, like the legend of Shag Harbour, where a UFO is said to have crashed into the waters off the Nova Scotia coast. As a kid, it crept into my nightmares and I pictured it happening in my own backyard, my family and friends running for our lives from aliens that crawled out from the depths.

I remember the social anxiety of adolescence, trying to fit in with my peers — and how, in the face of terror, you realize who your real friends are. I wanted this film to feel authentic to the lawless language that unruly kids use out of range of adult ears, an R-rated movie that can serve as a gateway for kids to fall in love with horror films, and a gateway back to childhood for adults.

Eisener’s comment here perfectly captures the film. It pulls you back through time and reminds you of your childhood. There’s so much familiarity to it all that you feel like you have been here before, like you’ve experienced these situations. I’ve never battled aliens (that I remember), but the film felt like a memory. It was fun, it was entertaining, and it was the perfect way to spend 75 minutes. I think that’s one of the keys to this films amazing qualities – it gets in and out quickly, the story doesn’t drag on, it doesn’t try to be a 3-hour magnum opus that loses its point. It is everything that it needs to be and nothing that it doesn’t.

The film focuses on that gap between those last few years of elementary school and those first few years of high school. The awkwardness, the lack of a sense of belonging, the naivete, and the false bravado. We get to see the relationships between friends and siblings, but also the conflict that a few years and a sense of superiority can generate. It is the best and worst of everything that you remember from that time in your life combined with aliens. Who doesn’t want to watch that?

The star of the film is Samantha, played by Phoebe Rex. I can’t tell you a lot about Rex because her IMDB is nearly blank and sadly, the press kit, did not include her bio. This is actually the thing that bothered me the most about this film. While the other two leads – Dominic Mariche as Gary and Calem MacDonald as Billy – both got complete bios in the press kit, Phoebe Rex did not. This is disappointing because she gives the standout performance and clearly carries the film.

In the film, Gary is making a home movie with his friends and Samantha plays a big part in the production. Their sibling dynamics start to shift when Billy and his friends (who are Samantha’s age) show up and mock the production and its participants. Wanting to fit in with locals her own age, Samantha starts to hang out with Billy and his friends. When Gary and Samantha’s parents head out of town around Halloween, Billy sees an opportunity to throw a rager to end all ragers at Gary and Samantha’s home. As with most teen parties, things get out of hand. What can only be described as a “shit show of a party” only gets worse when Aliens show up and ruin all the fun. This is when the action kicks in and the movie because pure, wholesome sci-fi/horror fun.

One of the highlights for me was the appearance of Jonathan Torrens as Gary and Samantha’s dad. As someone who remembers watching Jonovision every day after school, seeing Torrens on screen is always a treat. That said, the entire film was a lot of fun and I foresee it having quite a bit of nostalgic rewatch value.

Kids vs. Aliens was released in theatres, On Demand and Digital on January 20. 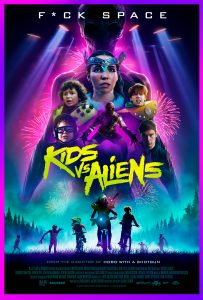 Movie description: All Gary wants is to make awesome home movies with his best buds. All his older sister Samantha wants is to hang with the cool kids. When their parents head out of town one Halloween weekend, an all-time rager of a teen house party turns to terror when aliens attack, forcing the siblings to band together to survive the night.