We have a tendency to compare films. Film A was better than Film B, but Film B was better than Film C. It is this tendency that drives the biggest blockbusters to be bigger and better than the last. This same tendency allows things that are flashy and showy to overshadow subtle beauty. With Press Play, you get subtle beauty. You get 85 minutes of perfection packaged up in a film filled with emotion. It is unlikely that it will ever get a lot of attention or win an Oscar, but when you look at Press Play in a vacuum without reason to compare, you get that perfect moment that makes you forget everything around you. Do not misunderstand my words. I’m not saying that Press Play could ever be anything other than brilliant, I’m simply saying that it will be overlooked because of how subdued it is compared to the flashiness that distracts modern movie audiences. If you are looking for that perfect romance, that ultimate film to curl up on the couch with a bowl of popcorn, a glass of wine, and the person that you love, then this is that film.

If you haven’t yet figured it out, I loved this movie. I was enthralled. For 85 minutes, nothing else existed and Clara Rugaard and Lewis Pullman were my world. Romance, time travel, and good music. In some ways, I feel like this film was written for me. I want you to watch this film. I want you to set aside everything else and devote your evening to enjoying what this film is – a look at love, sacrifice, and letting go.

I hope the film helps people realize that it’s important to try and overcome that human instinct. If we expect control over everything in our lives, that path can lead us to unnecessary grief and suffering. We tend to set ourselves up for failure by expecting specific outcomes.

In the film, Chloe (Lyrica Okano) introduces her best friend Laura (Clara Rugaard) to her step-brother, Harrison (Lewis Pullman). Laura and Harrison fall in love and they fall hard. Their relationship is fueled by music and, inspired by Harrison’s boss, Cooper (Danny Glover), and his wall of mixed tapes, they begin making a mixed tape of the hits of their relationship. When tragedy strikes, Laura struggles with life until she discovers that their mix tape can bring her back to when she first experienced the song with Harrison. Laura struggles to use the tape to rewrite history and prevent the accident from ever occurring.

The film was heavily inspired by someone very near and dear to me and who aided in my personal growth. In part, I made this film as a coping mechanism for subconsciously realizing I was slowly losing them and their familiarity. Grief is difficult. It’s not something that can be resolved immediately, nor is it a problem to be solved at all. Everyone deals with grief differently, but the definitive hardship we all must face in this life is loss. Watching Laura in PRESS PLAY, we can see the denial and mental battle she experiences. Her reaction to loss is just as severe the second time as it was the first, even though she already knows and has time to prepare for the undesired, inevitable outcome, something many of us can relate to.

Clara Rugaard is the standout star in this film. Her performance is incredible and brings everything together. While Pullman creates a character worthy of Laura’s pursuits and Glover brings wisdom and advice, it is Rugaard who steals the show. I was shocked to see how bare hear IMDB page was, but, given this performance, I suspect that will change. I could feel her pain, her love, and her struggle. I cried for her and cheered for her. While the film is conceptually brilliant, Rugaard brought it to life in a way that I doubt the writers ever expected.

If you’ve ever felt lost and struggled. If you’ve ever tried to control every aspect of your life and force your desired outcome. If you’ve ever wanted, more than anything, for love to overcome and been heartbroken instead. If any of these things apply to you, then this is the movie for you. You need to see this film. For me, music is life. I love it and how it makes me feel. I love the emotional rollercoaster than an album can evoke and the memories that it can stir up. This film takes everything that we know music is in our hearts and brings it to love.

I’m not sure how much you want to trust a review that is gushing about a film you may have never heard of, but I want you to watch it. I honestly wasn’t sure I was going to watch the film when I first heard about it, but it was exactly what I needed and the perfect way to spend an afternoon.

PRESS PLAY is about expectations and control and how hard it is to let go of them. When I set out to make the film, I wanted to create something that would both entertain and teach the audience the importance of letting go of expected outcomes. I’ve been through experiences in my own life that have brought me to the realization that you can’t control what other people think or do. I’ve found it’s a difficult realization to come to terms with, and it’s a challenge to control that impulse to try and change their mind.

Press Play was released in theatres and on demand on June 24. 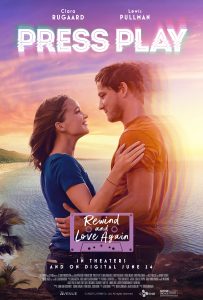 Movie description: Laura (Clara Rugaard) and Harrison (Lewis Pullman) have a picture-perfect romance built on the foundation of a shared love of music. After a deadly accident, Laura is given the chance to save the love of her life when she discovers that their mixtape can transport her back in time. Featuring a moving soundtrack with songs by Japanese Breakfast, Father John Misty, Dayglow and more, Press Play reminds you that love can always be replayed

I was intrigued by Buttigieg. He had a remarkable composure, evident intelligence, and a gift for conveying complex ideas in ways that felt graspable. But could his underdog campaign possibly be successful? Could a small-town […]