Midnight in the Switchgrass feels like it should be a good movie… after all it’s a thriller with Bruce Willis and Megan Fox. I’m a fan of both actors and I’m a fan of thrillers. What I’m not a fan of is a rushed story with gaps and bad dialogue and, unfortunately, Midnight in the Switchgrass has both. Don’t get me wrong… you could definitely sit down on a Friday night with a bowl of popcorn and watch this film…it’s not unwatchable… it just isn’t that good. It tells a story, which is a positive – some movies these days seem to lack a plot – it just isn’t enough to save the film from its problems.

Before, we jump into the problems, let’s talk about the film. Willis and Fox play FBI agents tracking predators in Florida. Willis is Fox’s back-up after she convinces people online to meet her at hotels. Emile Hirsch plays a detective who is investigating a string of murders happening within his jurisdiction. The two investigations cross paths, which leads to cooperation until everything goes wrong.

Let’s start with the biggest problem… the dialogue. Willis, Fox, and Hirsch deliver their lines well enough, you can’t fault them here. The supporting cast, however, is awful. I’m not entirely sure it is the casts fault because the dialogue is wooden and unnatural. Listening to the conversations between the various married couples is almost painful as they sound unnatural and unrealistic. Hirsch, who plays Florida Department of Law Enforcement (FDLE) detective Byron Crawford, has multiple conversations with his wife where it sounds like she has a gun to her head. In another scene, an employee at a trucking company (played by Samiah Alexander) sounds completely fake as she spouts her lines. It isn’t the actors ability here, it is 100% the dialogue.

Hirsch: Hello.
Alexander: Can I help you?
Hirsch: I’m not sure. My name is Byron Crawford, I’m with the FDLE. I’m trying to locate a Southern Harbour driver who …
Alexander: That would be our customer service department on the other side of the dock.
Hirsch: I was just hoping you could logs from last week and see who might have passed through the Mohawk on I-10 last Thursday evening. You know, I know they got …
Alexander: Let me stop you right there Mr. Crawford. I know what you’re doing, so I suggest you get a court order and I might be able to help you.
Hirsch: But ma’am
Alexander: I can appreciate the thankless and difficult nature of your job Mr. Crawford. But I will not get stuck explaining to my boss how this information was obtained outside the letter of the law.
Hirsch: I completely understand ma’am, I appreciate you explaining your predicament.
Alexander: I appreciate you understanding.

In the italics, I’m pretty sure they actually lost words during a scene cut (specifically ‘look at’). The bold just doesn’t feel natural at all.

A bigger problem with the film was the audio. This is something that I’ve come to notice more and more as I pay closer attention to films. For some reason, the audio appears to have had much of it’s higher end (treble) removed and the lower end (bass) increased. This created odd rumbling in my TV, but also made it difficult to hear the characters voices over the background noises. It reminded me of the poor audio I heard in a few movies where the audio production was done in Bulgaria, but that doesn’t seem to be the case here. I’m not sure why the audio choices were made, but I suspect this would have been a 3.5-star film if they hadn’t screwed up the audio editing so horribly.

We should also talk about another issue I have with the film and that is Fox’s character in action scenes. She’s supposed to be a bad-ass FBI agent who has had martial arts training, but her moves when she fights Calvin (Machine Gun Kelly) are rather lacklustre. They used a lot of fast camera cuts to make it look better, but it still doesn’t look realistic. I love action in films, I even like ridiculous over the top action, but, even if it’s impossible, I still want it to look realistic. The limited action in the film did not.

Finally, the movie exists only due to a lot of poor decisions and unrealistic situations. Whether it is going undercover without adequate back-up, walking slowly through a field of grass, hearing a noise inside another building and then not being able to hear it when you are outside and closer to the source. To watch this film, you have to suspend your belief that people will act logically and execute their jobs with at least some degree of professionalism and a minimal capacity to perform the requirements of their job. I get suspending disbelief for fantasy, horror, and Sci-Fi… but this is a thriller… it needs its realism to be thrilling and, unfortunately, it just didn’t exist.

Midnight in the Switchgrass will be released in theatres, on demand, and digital on July 23. 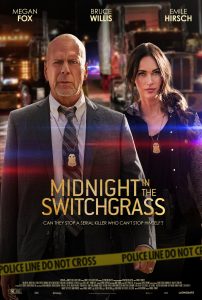 Movie title: Midnight in the Switchgrass

Movie description: Bruce Willis (Die Hard franchise) and Megan Fox (Transformers: Revenge of the Fallen) lead a powerful cast including Emile Hirsch (Once Upon a Time…in Hollywood), Lukas Haas (Inception), and Colson Baker (Bird Box ) in this gritty and intense crime-thriller. While in Florida on another case, FBI agents Helter (Willis) and Lombardo (Fox) cross paths with state cop Crawford (Hirsch), who’s investigating a string of female murders that appear to be related. Lombardo and Crawford team up for an undercover sting, but it goes horribly wrong, plunging Lombardo into grave danger and pitting Crawford against a serial killer in a twisted game of cat and mouse.