This weekend was supposed to be all about Toronto Comicon. I came home on Friday, had a late dinner, and called it a night after a long day on the con floor. As it tends to, insomnia reared its ugly head at the worst possible time and I found myself looking for something to watch on Netflix. I came across Turn Up Charlie and tossed on the first episode. The opening scene involves Charlie (Idris Elba) with his friend Del (Guz Khan) and aunt Lydia (Jocelyn Jee Esien) and, in the first few minutes, I turn the show off. It wasn’t for me. After a few minutes of looking for something else, I figured I might as well finish the first episode and turned it back on. From that moment, I was hooked. I watched the entire 8 episodes in a single binge session. My immediate response was that this is must watch TV.

The series revolves around Charlie, a one hit wonder from the 90’s trying to reclaim the glory he once had as a DJ. At a friend’s wedding, he runs into his best friend from the old days, David (JJ Feild) who is married to Sara (Piper Perabo), a world famous DJ. Through a series of incidents, Charlie ends up as a nanny (“manny”) to David and Sara’s daughter Gabrielle (Frankie Hervey). Every one of these characters are interesting and well developed. I felt like I knew each of them by the end of the series and was so disappointed when it came to the end, especially because it left me wondering, “What’s next?” I’m already eager for a second season and I’ll be wholly disappointed if I don’t get one. Even the supporting characters – Sara’s manager, Astrid (Angela Griffin), and her sound engineer, Tommi (Jade Anouka), as well as Gabs friend Hunter (Cameron King) – are interesting and well developed.

The story is one of friendship and redemption. It is the story of a little girl who yearns for more time with her parents and an aging musician struggling to find his place. The relationship between Gabs and Charlie is a reminder that friendship and mentorship can be found anywhere. That we are only human, we all make mistakes and can find redemption, and we all deserve a second chance. This might sound clichéd and it is, the series is definitely not an entirely new concept. It is, however, a well executed and fun delivery of the concept. Over the course of the 8 episodes, I laughed, I cried, I smiled through tears, and I waited with bated breath to see what would happen next. I found myself connected to the characters, feeling their anxiety and fears as well as their wins. The series is a roller coaster of emotions – one that I was happy to ride.

The pairing of Idris Elba and Piper Perabo was brilliant. The two well-known, well respected actors, both of whom dominate their scenes, demonstrated undeniable chemistry as their friendship-by-marriage evolved into musical collaboration. Even more brilliant were the scenes between Idris Elba and Frankie Hervey. I’m not sure where they found Frankie, according to her IMDB page this was her first role, but I would watch out for her in the future. She was a phenom on screen and, if I were a casting agent, I’d be scrambling to book her into my film or TV series. The scenes between Charlie and Gabs brought about the most tender, touching moments this series had to offer – a relationship between people from two completely different worlds and at completely different points in their life that just screams of the possibilities that surround us. When they were on screen, it was pure magic. Really, this entire series was pure magic. I want to stand on top of a building and scream to the world, “YOU MUST WATCH THIS!” I can’t wait for the second season and I’ll be disappointed in Netflix if I don’t get one. 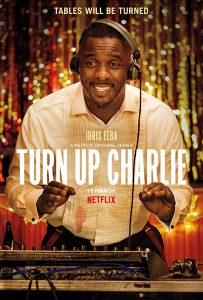 Description: Turn Up Charlie centers on the titular Charlie (Idris Elba), a struggling DJ and eternal bachelor, who is given a final chance at success when he reluctantly becomes a ‘manny’ to his famous best friend's problem-child daughter, Gabby (Frankie Hervey). Piper Perabo and JJ Feild co-star.