I can’t figure out if this movie was unintentionally bad or not. I can’t say that I disliked Homewrecker, I also wouldn’t recommend it to anyone as a “must watch”. The movie is billed as a horror comedy and that’s definitely fitting. It made me laugh more than I expected, but I’m not sure if those laughs were intentional. This is a movie where I wish I could sit down and have a conversation with the writer or cast to fully understand their goals. At the end of the day, I’m not disappointed I spent the time watching the movie, but I wouldn’t want to spend money to rent this film, I’d probably expect it to to be picked up by a streaming service like Shudder and I would definitely watch it while browsing the listings there.

The film feels like it draws from Misery and Single White Female. It’s about an older woman who inserts herself in the life of a younger woman, inviting her over and trying to make her a friend while also keeping her captive. It’s not a unique story, but it is a decent story when it is properly delivered. This movie does some things right, but there’s a lot of wrong, so I’m not sure it’s properly delivered, but it does tell the story.

Let’s talk about the good in the film first. The cast was great. I’m convinced that Precious Chong might actually be insane because her performance was so incredible, she was “Kathy Bates in Misery” good. Alex Essoe was also good, but not quite as good and I don’t think that was her fault. When you have bad dialogue, that just helps the crazy character look crazier, but it makes the sane character look like a bad actor. She did more with the dialogue than a less talented actor would have, but you could still tell it was bad dialogue and that it hurt her performance.

We also need to call attention to the set design. It was amazing. The creepy Raggedy Ann and Andy wall paper, the TV set, the photos on the fridge, the general disarray of the house. A lot of thought and effort went into making that home a creepy experience and it was well done. Even the Party Hunks board game was a great additional element to the film.

That brings us to the bad. The dialogue, the dialogue, the dialogue. So much of it was so bad. It didn’t flow or feel like real conversation. While a lot of it was delivered in a very wooden way, I don’t think that is entirely the fault of the actors, it would be hard for the most gifted actors in the world to deliver that script in a way that felt comfortable and natural. We also have to talk about the cinematography choices… specifically the long close-ups on a fizzing bath bomb. I’m not sure what the intention was, but it should all be cut from the film. At first, during the intro, I thought it was just a little odd, but then the movie started and, unfortunately, it was continually interspersed with the rest of the film. It wasn’t creepy, which I think was their intention, so it didn’t add to the film. It felt like the crew had no idea what they were doing with the cinematography and needed to extend the film by a couple of minutes.

At the end of the day, you’ll laugh and this movie may be remembered as being so bad it was good. It’s also creepy and worth seeing for Precious Chong’s performance… but overall the movie just isn’t good.

Homewrecker was released on DVD and Digital on July 10. 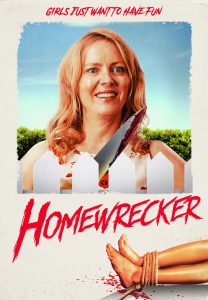 Movie description: Michelle is an interior designer and newlywed to Robert. Linda lives alone and fills her days with painting and exercise classes. Seeking a new friend, Linda coerces the reserved, deferential Michelle into visiting her home for a spontaneous interior design consultation. Once inside, it quickly becomes clear that Linda has something far more sinister on her mind than throw pillows.

I was intrigued by Buttigieg. He had a remarkable composure, evident intelligence, and a gift for conveying complex ideas in ways that felt graspable. But could his underdog campaign possibly be successful? Could a small-town […]