Fandom. The reactions of fans can be nothing short of crazy. They can be irrational, illogical, and ill-conceived. John Travolta’s new movie, The Fanatic, takes a look at what happens when fans cross a line but, in traditional Hollywood style, they amp things up a bit. We end up with a dark and creepy thriller that I suspect will leave most fans thinking it is completely unrealistic while most celebrities find it hits closer to home.

The Fanatic was written and directed by Limp Bizkit’s Fred Durst, which makes a scene referencing the band one of the more lighthearted and humorous moments in this incredibly dark film. It follows a fan, Moose, played by Travolta, who is obsessed with getting an autograph from actor Hunter Dunbar (Devon Sawa of Final Destination and Idle Hands) but fails to obtain said autograph and instead has an awful experience with an upset Dunbar. After his friend, Leah (Ana Golja of Degrassi: The Next Generation and Degrassi: Next Class), a paparazzi, shows him an app that lets you find celebrity homes, Moose decides to visit Hunter Dunbar’s home.

The movie is a continuous escalation. It starts with harmless visits to see the homes of celebrities but quickly escalates to trespassing, break and enter, and more. In order to get that Hollywood level of craziness packed into the movie, it appears that the creative decision was made to give Moose Autism Spectrum Disorder (ASD) in order to move the story along at a faster pace. I suspect that this is a creative decision that will prove to be somewhat controversial, but I think the character worked well in the movie.

As I mentioned, the movie is dark and creepy, but entertaining to watch. Travolta is incredible in the role and, as luck would have it, while I was working on this review, I had the opportunity to see him speak about his role at Fan Expo Canada as well as speaking with him very (very, very) briefly while getting an autograph afterwards. You could hear the passion for this project in his voice when he spoke at his panel. He clearly enjoyed making the film and wanted it to be something special. I was even more impressed when I met him at the signing and, even though he was running behind schedule, he stayed after the con had closed to make sure everyone got an autograph. When my wife and I spoke to him, I told him how much I enjoyed the film and he started talking about the role very passionately. I mentioned I was impressed with his performance and you could see a twinkle in his eye as he responded, commenting on how important it was to him that he portray the role properly. While he may have just been acting, I feel like this was a passion project for him and that he was very excited that people were finally seeing it.

They also showed the film at the con the night before Travolta’s panel, and I spoke to a few people in con-lines about the film. While there were mixed reviews, most of the people I spoke with agreed that they nailed the dark and creepy aspect and that it was an interesting film. More than one person compared it to Misery and there are definitely similarities between the two films. I enjoyed Misery and I enjoyed this film, and I think that’s probably a good way to tell if The Fanatic is a film for you. Being at the con definitely highlights the realism (even if it is portrayed to the extreme) of this film. The tagline for this film, “All he wanted was an autograph”, sets up the entire movie. I’ve seen people rage over their favourite celebrities cancelling, over lines being so long that they won’t get through, over the prices of autographs. Fandom definitely drives people to places they wouldn’t normally find themselves and this movie takes it one step further.

Quiver Distribution will release the thriller The Fanatic in theatres on August 30, 2019 and on Digital and On Demand on September 6, 2019. 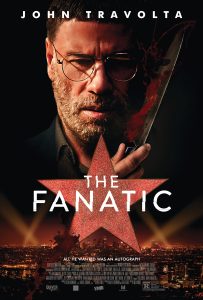 Movie description: Moose is a rabid movie fan who is obsessed with his favourite celebrity action hero, Hunter Dunbar. When he is cheated out of his opportunity to finally meet Hunter, Moose gets a little help from his friend Leah, a well-connected paparazzi photographer, who knows how to find celebrity homes. Moose turns to stalking to get the celebrity interaction he feels he deserves, and while harmless at first, Moose's actions begin to take a dark turn as his obsession grows stronger. As the visits continue to escalate, Hunter Dunbar finds himself in increasing danger.