That roughly sums up the inner dialogue I had with myself when I first heard about Paydirt. When I started writing reviews a couple of years ago, I found that low-budget action movies reminded me of the movies that I watched with my dad in the late 80s and early 90s. They were fun and simple and the fact that they were low-budget with bad dialogue didn’t really matter. Lately, however, even writers and directors of low-budget action flicks want to demonstrate their cinematic prowess with budgets that wouldn’t provide pizza for an entire high school and scripts that may have been written in those same schools. As such, I find it harder and harder to get myself into a low-budget action flick. Instead, I opt for thrillers or horror movies (a genre that so many movies are mistakenly categorized into), simply because they are better written and much more interesting. I do, however, make exceptions and seeing Val Kilmer in the cast list definitely inspired me to watch the film.

I am beyond happy that writer/director Christian Sesma was able to secure Kilmer, since that’s what drew me to the film. I actually enjoyed the movie. It felt like a low-budget version of Ocean’s Eleven or The Italian Job. My take on that was further reinforced when I read the director’s statement from Sesma.

I set out to create a very contained fun crime heist movie utilizing the casino, small town locations, desert back drops and high production set pieces to make what I feel became my “indie Oceans 11.“

Honestly, after reading Sesma’s statement, I wish I could give the film 5-stars. I also wish I could sit down, have a beer, and pick his brain for a bit. I’d love to discuss the film and his other projects. That’s not why you’re here though, so let’s dig into the film.

The movie brings us Luke Gross and Val Kilmer as a criminal and a sheriff. Kilmer manages to put away Gross for 5 years on marijuana charges, something that is legalized by the time his character is released from prison. At that time, however, they weren’t after weed possession charges, they were looking for much more, but I’ll let you watch the movie and find out what it is. I felt like this part of the film was poorly done. I’m not sure if they jumped into the action before they fully had my attention or if it was just poorly written. I feel like the movie was split into two acts with an intermission in the middle. During the first act, we get the background, which feels rushed and less than well done. It is worth pointing out that this part of the film is less than 10 minutes… it just felt much longer. Then we get the intermission, where we’re introduced to the gang. I’m going to call them the B-Team because we get these cheesy pop-ups that identify them – The Brit (Gross), The Brawn (Paul Sloan), The Brains (Mike Hatton), The Badass (Veronika Bozeman) and The Babe (Murielle Telio). After this, we get into the second act and it was great.

In the second half of the movie, we get action, we get misdirection, we get twists, we get some laughs, and we get a great story. I just wish the first half of the film had been as well executed as the second half. If it had been, I wouldn’t be talking about how excited I was to watch the new Val Kilmer film, instead I’d be talking about one of the best movies of the year. This movie also serves as Kilmer’s daughter’s first feature film. She had a pretty minor and insignificant role, but I did enjoy seeing Mercedes and Val on screen together, it added a few moments of tenderness and humanity that helped make the film more believable.

Something to watch out for is Mike Hatton’s performance. I felt like he was funny, relatable, and very entertaining. There’s a scene where he’s dressed up as a cleaner to get inside a building and the dialogue is amazing (props to Sesma for the writing), but the delivery just makes it so much better. I was surprised when I checked him out on IMDB. I was hoping to catch him in more films, but his credits list is quite small. I’ll be keeping an eye out for places where he pops up in the future, I think he stole the show every time he was on screen.

The real payoff with Paydirt is at the end of the movie and I found myself reasonably surprised by how it played out. There were a few added elements that didn’t further the story, but, for the most part, it gave us an awesome conclusion. I think that the movie, a heist film that masquerades as an action flick, is worth a watch… just know that the less than attention grabbing intro is made up for in the end.

Paydirt is in theaters, on Demand and Digital August 7th 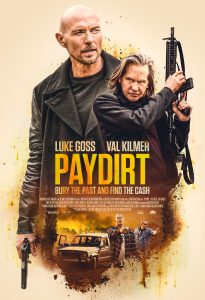 Movie description: A parolee teams up with his old crew determined to find a buried bag of cash stolen five years ago from a DEA bust gone bad but a retired Sheriff's obsession to right past wrongs leads to a gun blasting showdown in the middle of the desert.