There are movies that I remember from my childhood that I could watch time and time again. Films like Little Monsters, Gremlins, Three Amigos, and Little Shop of Horrors. I watched these movies on repeat and they were silly and weird, but they resonated with me and have stayed with me. I still buy items at cons related to this films and I’ll never forget meeting Zach Galligan. I feel like this could be one of those movies for tweens and younger teens today. I’m not sure what the intended audience is, but I could see myself at 12 or 13 absolutely loving this film. As an adult, I was entertained and still enjoyed it.

The film centres around siblings Mimi (Nita-Josee Hanna) and Luke (Owen Myre) who release a mass murdering alien (Matthew Ninaber) while digging a hole in their backyard. The two of them are playing an odd game of their own creation and the loser, Luke, has to dig a hole in which he’ll be buried. When he strikes a pink amulet with the shovel, Mimi (his bossy little sister) takes it and claims it as her own. They later learn that removing the amulet released the alien, but also gives Mimi control over the creature. She names him Psycho Goreman, or PG for short and we find ourselves in a movie involving what appears to be galactic war and the ultimate fight between good and evil. Although, it isn’t exactly clear as to who is good and who is evil.

I think that’s one of the things that makes the movie fun for adults. It has a very retro 80s/90s vibe, but it also offers an interesting take on the idea of good and bad and the grey area that exists between. Whether it is PG and his army, PG and the person who imprisoned him, Mimi and Luke, or even Greg (Adam Brooks) and Susan (Alexis Kara Hancey), Mimi and Luke’s parents… it’s an interesting look at who is the villain and how fluid that role can be.

At the same time, the film isn’t exactly highly philosophical. While it is thought-provoking, the majority of the film’s fun comes from the cheesy horror, horrible dialog, and excellent comedy. We laughed more than a few times while watching the movie and my wife had to turn her head away from the gore on more than one occasion. I feel like this is a film that gives us the cheese that some of us really enjoy. If, however, you’re not big on cheese, then this probably isn’t a movie for you.

I think my favourite part of the movie is the interactions between parents, Greg and Susan. The level at which they detest each other makes for some amazing scenes and even better one-liners. While the kids and aliens are good, it is these adults that truly steal the show, especially Greg who makes himself completely unlikeable. He is impossible to like, but his wife, Susan, is equally horrible at times, leaving you to wonder if you should root for one over the other or just hate them both. Greg also gets the best scene in the movie, but all I’ll say is that it involves a bathroom.

RLJE Films released the Horror/Comedy PG: Psycho Goreman in Theaters, On Demand and Digital on January 22. 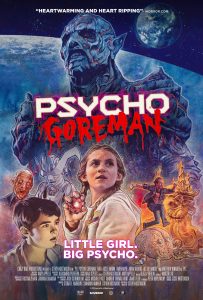 Back at the start of November, I reviewed Triggered. If you haven’t seen the film or read the review, I’d recommend you do that first as this post may contain spoilers. After reviewing the film, […]