Jaw dropping. That sums this film up quite nicely.

This movie is an electrifying wild ride from the opening scene with the awful CGI jet. I can honestly say that the horrible CGI in the opening scene is the worst part of the film. Everything from that point is edge of your seat, heart pounding, craziness. To quote my wife, “That gave me anxiety.”

The movie follows Cole (Keegan Allen), a 28-year old vlogger, who posts his entire life online. He’s celebrating his 10th anniversary of social media fame and wants to do something absolutely crazy. That crazy thing – a trip to Russia to party with a rich, connected Russian fan, Alexei (Ronen Rubinstein), setup by fellow social media influencer Dash (George Janko). Along for the trip are Cole’s girlfriend, Erin (Holland Roden) and his best friend, Thomas (Denzel Whitaker), as well as Dash’s best friend, Sam (Siya). After a night of partying at an exclusive night club, it’s off to a custom built escape room.

At the beginning, it seems like everything is awesome. The crew is excited to be in Russia and inside an exclusive club. That’s when things first go wrong as a couple of guys start harassing Erin. This scene gives us a real insight into Cole’s life… he’s more interested in talking to twins that are fans of his YouTube channel and doesn’t pay attention as Erin is yelling for help. Thomas tries to get Cole to pay attention, but it takes way longer than it should. As I said, it’s telling of his personality and his desire to be famous on camera – I also think it’s very realistic when we look at the lives of real social media influencers and their complete disregard for social distancing in order to throw massive parties.

That’s about as far into the film as I’m willing to go. I don’t want to discuss it because I don’t want to spoil anything that happens. Check out the trailer and, if it appeals to you, give it watch. Personally, I recommend that you do, but I acknowledge that the film isn’t for everyone. If you are interested in this film, I don’t recommend reading any other reviews, as spoilers are out there and a lot of reviews don’t hesitate to drop tons of spoilers, which would ruin this film.

I wasn’t super excited going into this film. The trailer was interesting, but it looked like a straight-up horror film and I haven’t been in the mood for those lately. The movie seems to be called a horror/thriller, but I don’t feel it ventures far enough into the horror category to qualify. I feel like this is definitely a thriller and it converted me into a fan. It was so well done and so much of that is owed to Will Wernick, the writer/director. He did an amazing job, and I will definitely pay more attention to films that feature his name in the future.

If you enjoy a wild ride and a bit of gore, this film is perfect for you. A word of warning… you will become well acquainted with the edge of your seat watching this movie. The intensity of this movie just builds and builds, which is amazing and almost unbelievable.

No Escape is available on digital and on demand on September 18. 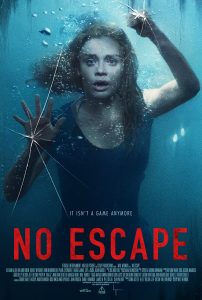 Movie description: A social media star travels with his friends to Moscow to capture new content for his successful VLOG. Always pushing the limits and catering to a growing audience, he and his friends enter a cold world of mystery, excess and danger. As the line between real life and social media is blurred, the group must fight to escape, and survive.

The love story is at the heart of the film. I like mismatched couples, star-crossed lovers who carry the day in the end. The only thing that interests me is love stories, but I never […]

It’s hard to describe how I felt watching BlacKkKlansman. I’ve been slow to write this review because I’ve spent the past month digesting it. When I first watched the film, I wrote down “Powerful, Dark, […]